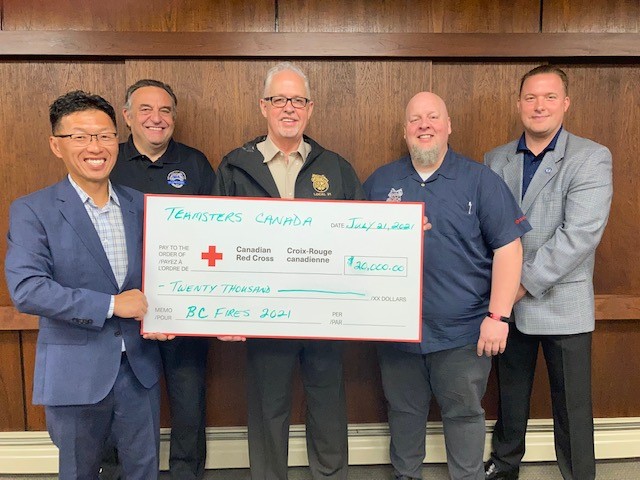 Teamsters Canada and Teamsters Joint Council 36 have made a $40,000 contribution to the Canadian Red Cross in response to the ravaging wildfires in British Columbia.

“There is a disaster in BC, and Teamsters Canada will join with Teamsters Joint Council 36 to provide financial relief to help communities overcome the destruction from the wildfire,” stated Francois Laporte, President, Teamsters Canada.

Since the absolute destruction of Lytton, BC and the Lytton First Nations in June, there have been a total of 1,486 wildfires and 660,071 hectares of area burned, according to the statistics from the BC government. And it is only getting worse with BC entering its third heatwave this summer, where temperatures have reached 49 Celsius.

“I thank President Laporte and the Teamsters Canada Executive Board for matching the initial $20,000 donated to the Red Cross by Joint Council 36,” stated Stan Hennessy, President, Joint Council 36. “The Teamsters donation will go a long way since the BC and federal governments will match it.”

The Teamsters $40,000 donation to the Red Cross will equally be allocated to support the relief efforts within the Lytton community and help the evacuee and firefighting efforts in the BC interior.

In addition, the Canadian Pacific Railway partially matched the Teamsters contribution by donating $20,000 to the Red Cross for disaster relief in Lytton. The Teamster members employed at CP Rail and members across British Columbia thank the rail company for its assistance.

The Teamsters Union is truly a team built across North America, and when there is a need for help, the Teamsters will be ready. “On behalf of the Joint Council, we thank everyone involved, especially Stephanie Pike, Local 31 Secretary and Berna Ho, Joint Council 36 Secretary, for their efforts coordinating the donation relief,” respectfully says Stan Hennessy, President, Joint Council 36.

The national office of Teamsters Canada is based in Montreal, QC and is responsible for the union’s Canadian interests on the national level. Joint Council No. 36 is established in British Columbia and the Yukon Territory and comprises Local 31, Local 155, Local 213, and Local 464.