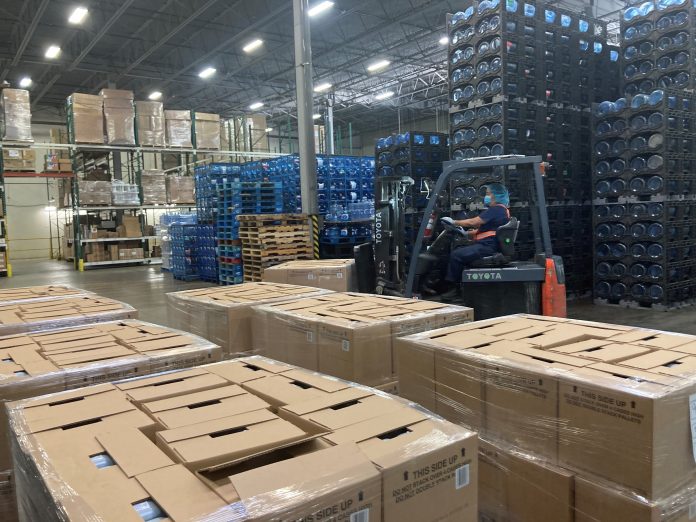 BC Firefighters, Firefighters worldwide, and the Canadian Armed Forces are battling to extinguish wildfires in British Columbia that are causing mass devastation. To support the courageous people protecting our province, the Teamsters, Local Union No. 31, Canadian Springs Water Company, and Van-Kam Freightways Ltd. have combined to supply a truckload of drinking water to keep all fire services personnel and evacuees hydrated.

“Providing drinking water to evacuees and Firefighters is a necessity and a job where the Teamsters Union can help,” says Stan Hennessy, President, Teamsters Local 31, “our action plan was made possible by the outstanding generosity of Canadian Springs and Van-Kam Freightways.”

The fire that destroyed Lyttton, BC, was when the alarm bell started ringing for President Stan Hennessy. The president led LOCAL 31 into developing an action plan to support evacuees and the Firefighters who are sacrificing their health and safety to protect our province and prevent another Lytton disaster.

Business Agents Mike Hennessy and Paul Simms were involved in arranging the procurement and transportation of the bottled water to Kamloops. Stephanie Pike, Local 31 Secretary, made the delivery arrangements with the Kamloops Powwow Arbour, designated as the Tk’emlups te Secwepemc Evacuation Centre for fire evacuees and storage ground for fire logistics. The evacuation centre is located close to the sixteen wildfires surrounding the city of Kamloops.

“The Teamsters Union is about action,” stated Mike Hennessy, Business Agent, “the union used its organizing ability to get groups together to make lives better for those who have been evacuated and fighting this wildfire.”

The Canadian Springs Water Company is the largest and longest-serving water delivery company in Canada. For decades, the Canadian Springs Richmond facility employees have bottled and delivered purified spring water as proud members of Teamsters, Local 31.

Since BC is experiencing a hot, dry summer, the company’s bottled water demand has soared. As a result, Canadian Springs went the extra distance by shipping 9.6-litre water jugs from its Washington State facility to Richmond, BC. Forklift Operator Margarita Atienza, 20-year Teamster, proudly loaded the skids into a waiting Van-Kam Freightways trailer destined to the Kamloops evacuation centre.

Van-Kam Freightways Ltd. is the largest freight company in British Columbia and has been “hauling freight for friends” since 1947. Over the years, the family-owned company has expanded its business to all regions of BC, where proud Teamster members provide excellent warehouse cross-dock service, and drivers deliver the latest shipment of goods to customers while mechanics service the hundreds of trucks and trailers, making Van-Kam Freightways an industry leader in freight.

“In times of disasters, there is hardship, and Van-Kam Freightways hopes we can provide some relief by helping out with the Teamsters initiative to provide drinking water,” said Robert Henry Jr., C.O.O, “on behalf of my family and employees at Van-Kam, we thank all Firefighters, Canadian Armed Forces and wildfire rescue workers for their service.”

Van-Kam donated its services by transporting the bottled water from Richmond to Kamloops. Driver Paul Banwait, 14-year Teamster, proudly picked up the shipment from the Canadian Springs facility and drove it to the Van-Kam Surrey warehouse, where it was cross-docked and loaded en route to its Kamloops warehouse. Driver Jack Wong, 11-year Teamster, delivered the water to the Tk’emlups te Secwepemc Evacuation Centre to be distributed to evacuees and Firefighters.

The action plan to transport the bottled water to Kamloops was a success, and the Tk’emlups te Secwepemc Evacuation Centre is doing a terrific job in delegating the resources. Overall, the Teamsters thank everyone involved for working together to provide relief to those who need it the most.