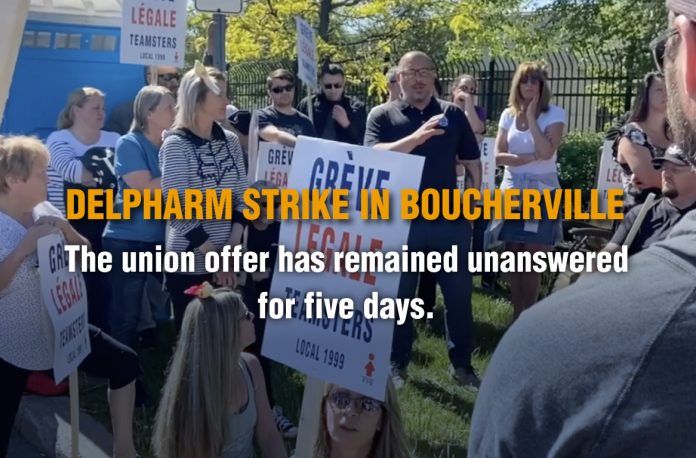 Laval, May 31, 2022 — Five days have now passed since union representatives of Teamsters Canada Local 1999 submitted an offer as part of the collective agreement negotiations with Delpharm Pharmaceutical Company in Boucherville. The plant is the largest injectable manufacturing facility in Canada.

“Despite the strike, we remained at the bargaining table because we take the needs of patients seriously,” explains Jean-François Pelletier of Local Union 1999.

A general strike was called on May 25. An offer was made by union representatives to the employer on 26 May, still unanswered. Wages, pension scheme and working hours remain at the heart of the dispute between the parties.

The plant, acquired by European subcontractor Delpharm from Sandoz Canada in March 2022, manufactures essential injectable products for hospital patients across Quebec and the rest of the country. The Teamsters represent the approximately 227 employees, who were notably considered essential workers during the pandemic.

“Our understanding was that the new management would invest in the plant and in business development opportunities to ensure its growth,” said Michel Héroux, President of Teamsters Local 1999. Their strategy instead takes aim at the livelihoods of the essential workers who have made the plant successful, while the purchasing power of our members crumbles day by day.”

Negotiations have been in a cul-de-sac for some time. At a trade union meeting held on March 19, Delpharm workers voted in favour of a strike by 97% after 99.4% refused the latest employer offers. The request for conciliation submitted to the Ministry of Labour by Teamsters Local 1999 last April did not yield any results.

“This labour dispute could be resolved quickly by the employer with a serious approach,” adds Teamsters Canada President François Laporte. We must recognize that it is not up to workers to bear the plants’ operating costs, especially while the province is experiencing full employment, and it is increasingly difficult to attract skilled workers.”

The next bargaining session is scheduled for Friday, June 3, 2022 in the presence of the conciliator at the Tribunal administratif du Travail.

The Teamsters Union represents the interests of 125,000 members in Canada. They are affiliated with the International Brotherhood of Teamsters, which has a union membership of 1.4 million in North America.