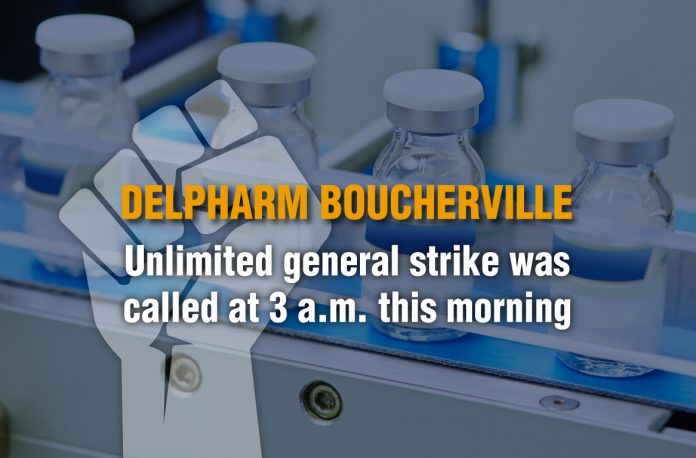 Laval, May 25, 2022 — Workers at Delpharm pharmaceutical company in Boucherville have taken action with an unlimited general strike was called at 3 a.m. this morning. The plant manufactures essential injectable products for hospital patients in Quebec and across the country.

The request for conciliation submitted to the Ministry of Labour by Teamsters Local 1999 last April did not yield any results. The Teamsters represent all of the approximately 227 factory employees.

“The employer is serving up old soup with a sophisticated name, but it’s still old soup and our members are very familiar with it,” explains Jean-François Pelletier of Local Union 1999. Clearly, they are simply insulted by the offers put forward by Delpharm’s leaders.”

At a trade union meeting held on March 19, Delpharm workers voted in favour of a strike by 97% after 99.4% refused the latest employer offers.

Negotiations have been in a cul-de-sac for some time. The walkout has become unavoidable.

“In Quebec, food prices increased by nearly 10% in April,” says Michel Héroux, president of Teamsters Local 1999. Gasoline prices, as well as that of other essentials, are growing just as quickly. Workers do not want to lose their purchasing power, so they are acting accordingly.”

These members of Union Local 1999 are experiencing their second labour dispute in 6 years, the employer having instigated a lockout in June 2016. At present, wages, pension scheme and working hours remain at the heart of the dispute between the parties.

“This labour dispute could have been resolved if Delpharm’s management had been serious during the talks,” adds Teamsters Canada President François Laporte. Unfortunately, the negotiations failure puts patients who depend on their medications in a very difficult position.”

The employment contract ended on January 31.

“We are ready to resume talks,” concludes Jean-François Pelletier. But we demand an offer that meets the needs of employees.”

The Teamsters Union represents the interests of 125,000 members in Canada. They are affiliated with the International Brotherhood of Teamsters, which has 1.4 million members across North America.