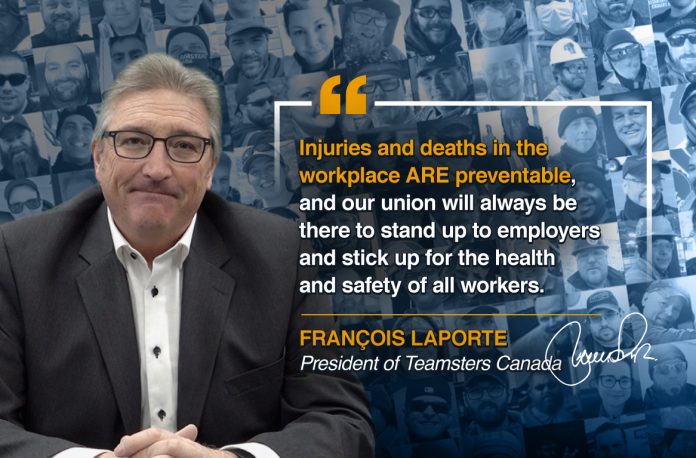 April 28 is the National Day of Mourning, a day to remember those who died or were injured in the workplace. It is also a day we must all recommit to improving health and safety and preventing tragedies in all workplaces.

Sadly, in today’s economy, companies routinely put profits over safety. But while the goal of any company is certainly to make money, disregarding the health and safety of workers to maximize shareholder return also carries risks for the company.

Look no further than the deadly Canadian Pacific (CP) train derailment near Field, B.‑C, in February 2019 which took the lives of three workers and Teamster brothers. The official report into the crash was released just last month.

The Transportation Safety Board (TSB) found that CP had “normalized” widespread problems like brake malfunctions in cold weather. According to the TSB, these problems were flagged year after year, and largely ignored. No risk assessment was ever conducted, and proper corrective action was never taken.

Because profits trump safety in the corporate world, Canadian Pacific executives still got worker safety bonuses that year. According to the Globe and Mail, the company paid $6.6-million in bonuses to its six top-paid executives, of which $800,000 was tied directly to the company’s safety record. The safety pay made up over $350,000 of the CEO’s almost $3-million bonus. Other CP managers also received bonuses for safety performance.

The derailment is now under criminal investigation by the RCMP. One key determination will be to what extent criminal negligence on the part of CP played a role in the derailment.

In Canada, managers and corporate directors have only recently become criminally liable when failing to take steps to protect the lives of their employees. The law was only changed after Canadian unions lobbied the government following the Westray Mine disaster, which took the lives of 26 miners. It was later established that the company had cut corners on safety in pursuit of higher profits, with deadly results.

Many people are still unaware of the significance of April 28. We invite everyone to raise awareness about the National Day of Mourning by sharing this post or the countless others you will come across today. You can also attend memorials in your community, light a candle or wear a black ribbon in honour of those we lost.

But most importantly, you can honour the memory of the workers we lost by fighting for the health and safety of the living. That means attending union meetings, getting involved in health and safety committees, focusing on prevention, and never being afraid to speak up when you see something dangerous at work.

Workplace safety is still something we need to fight for. Injuries and deaths in the workplace are preventable, and our union will always be there to stand up to employers and stick up for the health and safety of all workers.