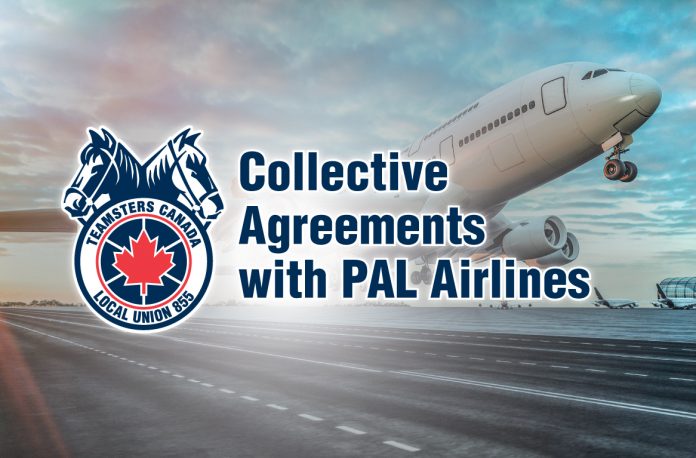 Teamsters Local Union 855 President Richard Gill, along with his negotiating committee, are pleased to have successfully negotiated and ratified their first collective agreements with PAL Airlines. The two collective agreements cover approximately 90 workers at the St John’s, Deer Lake, Happy Valley Goose Bay and Wabush stations in Newfoundland and Labrador.

“Through the long and challenging negotiating process, our Sisters and Brothers stood strong, enabling their Union to secure improved working conditions across the board,” said Richard Gill, Teamsters Local Union 855 President. Improvements include a higher wage package, elimination of term work contracts, no subcontracting-out language, work schedule improvements and wage parity for Customer Service Agents, whereby they have seen their top rate increase from $18.36/hour to $25.20/hour.

“We would like to thank everyone involved in the negotiation process for their commitment in achieving a four-year collective agreement that provides benefits for all. Teamsters Local Union 855 is looking forward to help secure the future of our valued members at PAL Airlines,” Gill concluded.

PAL Airlines is based in St. John’s, Newfoundland and Labrador, and serves an extensive network in schedules and charter destinations across Eastern Canada-Quebec.