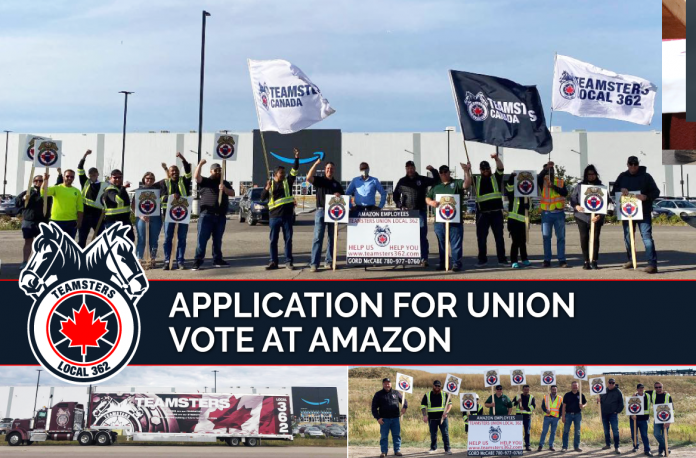 Edmonton, September 14, 2021 – Teamsters Local Union 362 filed for a vote on union representation at the Amazon YEG 1 Fulfillment Centre in Nisku, AB, late yesterday afternoon.  This represents the first step in the Teamsters Canada union organizing campaign to bring Amazon to the bargaining table.

“Amazon won’t change without a union. Be it on job security, pace of work, discrimination, favouritism, or wages, the company has proven itself to be profoundly anti-worker. Amazon workers need to know they are not alone and they have the power, through the Teamsters, to change things for the better,” said the national president of Teamsters Canada, François Laporte.

The Alberta Labour Relations Board (ALRB) must first verify the application. Once they do, all Amazon employees at YEG 1 who were employed as of yesterday will have a chance to vote on being represented by Teamsters Local Union 362. More information on the process and the timeline will be known once the ALRB decides on the request for a vote.

Amazon does not fundamentally respect Canadian workers’ right to join a union. The union expects that the company will actively bend the rules to rob workers of their ability to improve their lives through unionization.

“Amazon workers need to know they now have some protection under the law. The company cannot simply fire them or change their working conditions during the union certification process. They also cannot actively interfere with their decision on how to vote. Coercion, intimidation, threats, promises or undue influence are strictly prohibited,” said the secretary-treasurer of Teamsters Local Union 362, Bernie Haggarty.

Amazon workers are asked to write to GMcCabe@gtl362.ca if anyone in a position of authority at the company makes them feel uncomfortable or pressured on the issue of unionization.

The recent pay raise announced at Amazon is a response to organizing efforts by the Teamsters Union across Canada. But while the company has now promised to pay warehouse workers between $17 per hour to $21.65 per hour, it still falls far short of Teamster-unionized wage rates which progress up to between $24.50 per hour and $31.93 per hour within five years, depending on specific sector.

“We hope that Amazon is actually increasing their workers’ take-home pay and not just fudging the numbers by increasing wages while slashing bonuses. Regardless, it shouldn’t take a union organizing campaign to get a company to treat workers better. Even now, the company still falls far short of what they could and should be offering,” added Bernie Haggarty.

Discrimination and favoritism have also revealed themselves to be major concerns at YEG 1, with a large number of Amazon workers joining the union campaign after feeling that they were given less favourable assignments due to their ethnic background or their relationship with their superiors. Most of the frontline workers at YEG 1 are new Canadians and visible minorities, whereas almost all of the supervisors are white.

“We are not anti-Amazon. We are simply trying to help Amazon workers. We are not bothered by the fact that Amazon is a successful company. We are bothered when we hear about workers not getting their fair share, or not being treated with the respect and dignity they deserve,” said François Laporte.

The Teamsters Union has been in Canada for over 118 years, and warehousing and delivery services have been among the union’s core industries for just as long.

Teamsters represent close to 125,000 workers across Canada across multiple industries. The International Brotherhood of Teamsters, with which Teamsters Canada is affiliated, has 1.4 million members in North America. Visit teamsters.ca for more information. Follow us on Twitter @TeamstersCanada and “like” us on Facebook at facebook.com/TeamstersCanada.

Workers at Amazon in Alberta have taken the first step toward joining a union.
Work at Amazon? Contact a Teamster organizer HERE