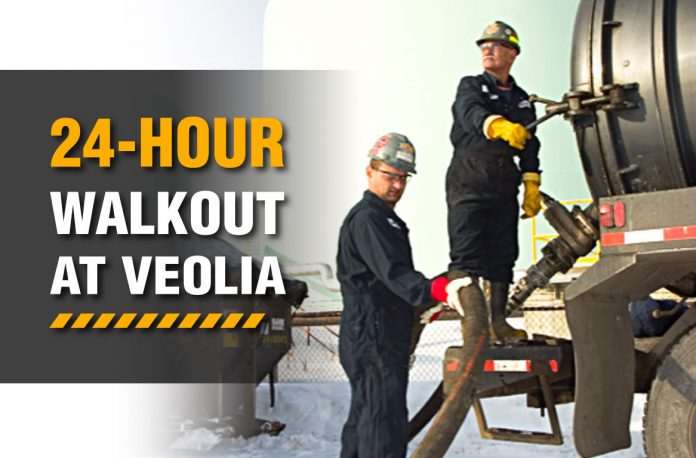 Laval, March 21, 2021 – The 270 workers of Veolia Industrial Cleaning will begin a day of study tomorrow morning (Monday, March 22) at 5:00 a.m. Picket lines will be set up at the plant and will be set up for 24 hours in front of all the company’s places of business in Quebec, including on 1705 3rd Avenue in Pointe-aux-Trembles, where the Teamsters Union spokesperson will be available for interviews at 6:00.

Veolia is a European company that offers pumping, tank cleaning and chemical decontamination services in Quebec and elsewhere in the world. The work of its employees is essential for the protection of the environment.

The members of Teamsters Local Union 1791 at Veolia want to express their disagreement with the employer’s offers submitted to a conciliator on March 18.

” With a very strong strike mandate given by the members to their union, it would be in the employer’s best interest to return to serious negotiations,” warns François Laporte, president of Teamsters Canada. “These men and women deserve better than what was offered, especially considering the fact that their job is physically demanding, sometimes even dangerous.”

Indeed, ninety-eight percent of Local Union 1791 members who participated in the vote gave a strike mandate to their bargaining committee a few weeks ago.

“It appears to us that the employer wants to change the work schedule in a way that puts employees at a disadvantage,” says Local 1791 President Chris Ashford. ” The rollbacks they are experiencing on the standards and wage clauses are unacceptable. “

The workers therefore consider the latest employer offers to be “insulting”, as well as being incomplete.

This 24-hour study day is a warning to Veolia’s management. An unlimited general strike could be called at any time in the coming weeks.