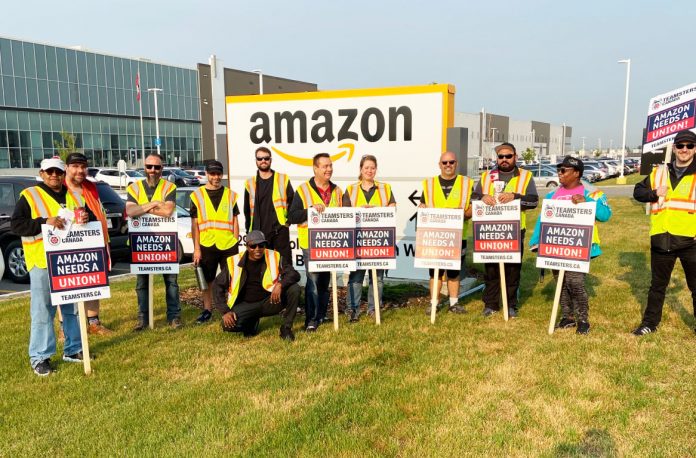 They are some of the hardest working people out there, at one of the most demanding companies in the world. They sacrifice so much of their time, health and wellbeing so that their employer can turn a profit.

They are heroes of e-commerce, responsible for filling millions of online orders in Canada. But they are also some of the most underpaid and overworked folks out there.

I am referring to Amazon workers, of course.

In June, at the 30th International Teamsters Convention, delegates voted in favour of a massive Amazon organizing drive. The resolution called for building worker power at Amazon and helping those workers a achieve a union contract. It also called for the creation of a special Amazon Division that would oversee the effort.

The Teamsters Union has been in Canada for over 100 years, and warehousing and delivery services have been among our core industries for just as long. We fully intend on being there for any Canadian Amazon worker who feels, like us, that they deserve better.

This campaign is not anti-Amazon; it is pro-Amazon workers. We are not bothered by the fact that Amazon is a successful company. We are bothered when we hear about workers not getting their fair share, or not being treated with the respect and dignity they deserve.

We know that warehouse workers at Amazon handle intense demands. They are told to pick an item every 9 to 12 seconds, and those who fall behind face discipline at the hands of the company. This has also led to higher injury rate at Amazon facilities. We know from our conversations with Amazon workers that lower back and knee pain is frequent, even among fit young workers.

On job security, all Teamsters agreements have grievance procedure language to deal with unfairly disciplined workers. Moreover, once unionized, the company will no longer be able to fire workers without just cause. Amazon would need proof of very serious misconduct, like theft or insubordination. Because no company should be able to get rid of honest, hardworking employees who get injured or can’t keep up with unreasonable demands.

On health and safety, the union difference is also well documented. For example, at Sysco warehouses, the Teamsters got the company to agree to provide enhanced training safe lifting practices and put in place other controls to reduce injury risk. An ergonomist hired by the union regularly checks to ensure standards at the company remain reasonable, and the union has ways to stop changes to performance standards that would unduly impact workers’ health and safety.

Likewise, we know that days and weeks can be long at Amazon, with long hours being the norm. Here too, unions can help. Overtime controls are built into the collective agreements at both UPS and Purolator. And under the terms of the new UPS Canadian collective agreement, ratified just this year, full-time employees earn double time on the weekend, provided they work at least five hours.

And what about wages? Amazon warehouse workers in Canada start at around $16 or $17 an hour. But while Amazon workers stay around those levels, workers at Teamster-unionized warehouses see their wages progress up to between $24.50 and $31.93 an hour, dependent on specific industry, usually within five years.

Finally, many warehouse and delivery workers have seniority rights, which equals longevity at a company. Many of our members have lifelong careers at a single company and can retire with decent retirement savings or a secure pension.

I could go on, and on. There are countless companies, big and small, that treat workers better than Amazon all while remaining competitive and profitable. But that will change unless Amazon is reined in and stops driving down wages and working conditions in delivery and warehousing.

What better way to maintain standards in an industry, and work to improve them further, than joining a union?

Amazon workers, you are not alone.

François Laporte is the president of Teamsters Canada, a union representing 125,000 workers in Canada.

> Learn more about the campaign <