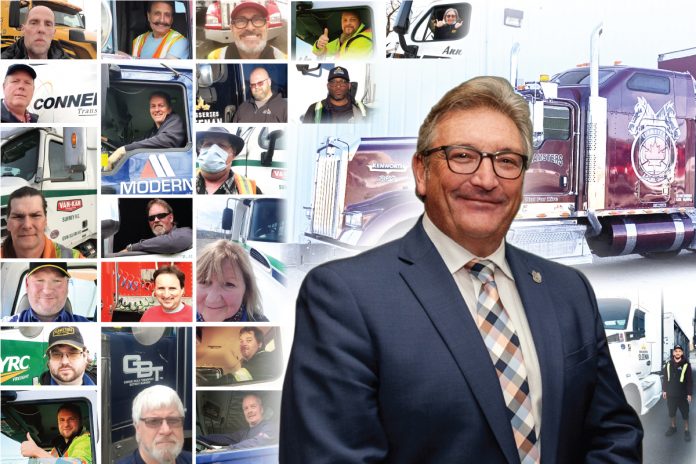 With the COVID-19 pandemic, the contribution of truck drivers to the well-being of all Canadians has been, more than ever, invaluable. Without them, the economy would have almost completely ceased to function and chaos would have quickly taken hold in our cities and countryside.

I would like to acknowledge their contribution during National Trucking Week by reminding everyone that the crisis is not over yet, and that many truckers still have to find imaginative ways to deliver essential goods across North America. Make no mistake, the impact of this crisis is still being felt in the supply chain.

That said, there is more at stake than the health and safety of truckers. Another important behind-the-scenes challenge that many truckers have faced in recent years is the “Driver Inc” phenomenon.

A “Driver Inc” is, broadly speaking, a self-incorporated worker who operates a commercial vehicle that they do not own or lease. They are usually forced to self-incorporate by a transportation company, the driver’s sole and only employer, who pays them in exchange for work. Besides the fact they are self-incorporated, these drivers are virtually indistinguishable from a regular employee at any trucking company.

We have also noticed that they are dragging the working conditions of all workers in the industry down since the companies that use their services compete unfairly with those that respect the fiscal rules.

I am not talking about owner-operators who pay their fair share of taxes.

Being a “Driver Inc” or forcing an employee to become a “Driver Inc” opens up the possibility of tax evasion, and the consequences for society are significant: some drivers do not pay their taxes, and companies that use this model do not pay into programs like workers’ comp, the CPP, EI or anything else resembling a payroll tax or deduction. Remember that these taxes and deductions are key to maintaining our social safety net.

The result is a significant loss of public revenue while tens of thousands of other truckers – and transportation companies – play by the rules and pay their fair share to society all while competing with those who do not.

Employers and truckers who use the “Driver Inc” model also need to understand that this type of short-term gain will result in long-term pain. Sooner or later, the taxman will end up taking a closer look at their income, with all the consequences that follow.

Moreover, should drivers operating under this scheme ever get hurt on the job or want to retire, it will be almost impossible for them to benefit from the full range of government support available to everyone else since they have not paid into any programs.

Teamsters believe that all truck drivers should have a fair wage, generous health and welfare benefits, and the right to retire at a reasonable age. Since these “Driver Inc” companies are dodging their taxes, they often charge less for their services, putting a downward pressure on wages in the trucking sector.

I believe that if all truck drivers were on an equal footing, their overall quality of life would improve across the country. This would make the trade more attractive to a younger workforce.

Happy National Trucking Week! Thank you to truckers for their hard work and safe driving.