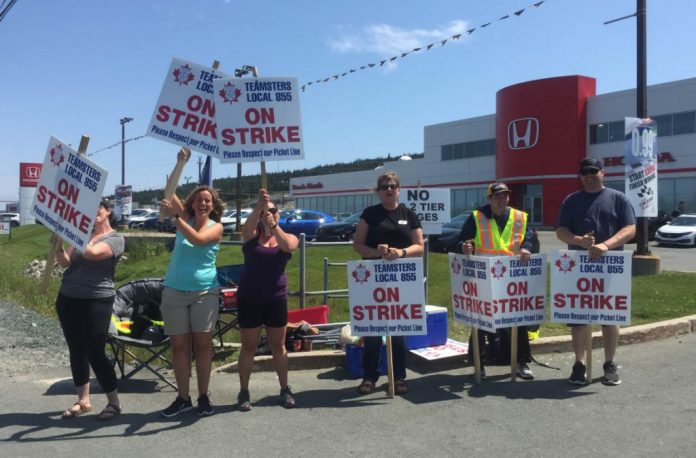 Technicians, service advisors, parts workers and office staff at the Steele Honda dealership in St. John’s, Newfoundland, are on strike! The workers walked off the job on the morning of Thursday, July 25.

The dealership’s approximately 40 unionized workers are trying to push back against their employer’s demands for cuts and concessions.

The main issue is management’s push to pay car technicians a flat rate for repairs instead of an hourly rate. That means workers would earn a pre-determined sum for each type of repair performed, regardless of the amount of time it takes to get the job done.

Most of the dealerships in Newfoundland and Labrador use the hourly rate. The flat rate system could lead to technicians losing money for putting in more time to work on repairs that are more complex than usual. It could also encourage them to rush through tasks to get as much done as possible – a position which the striking workers do not want to be placed in.

Complicating matters is the employer’s proposal to hire less fully trained journeyperson technicians, replacing them over time with apprentices. Under the plan, up to half of the technicians at the dealership would be apprentices. It has the potential to make repairs take even longer.

Finally, the dealership also wants to slash wage rates of all future technicians by 8%, effectively introducing a two-tier system in the workplace. All new hires would also have 3 less sick days.

While the demands for concessions mainly affect the 20 or so technicians, the other unionized workers at the dealership have opted to support the strike, fearing they might be next.

The union has simply asked for a 2% raise and a small RRSP program. Instead of trying to work with their workers and their modest proposals, the dealership has decided to fight them and ask for concessions. They have even started to contract-out work to other dealerships.

Without a union, these workers would have been powerless to defend themselves against their employer’s cuts.

Teamsters Local Union 855, which represents the striking workers at Steele Honda, represents close to 450 workers at fifteen other dealerships across the province. The local also represents truck drivers, couriers, construction workers and many others.

Want more information about how to join a union? People in Newfoundland and Labrador and can contact Teamsters Local Union 855 by calling 709 579-5706. All information is handled confidentially.