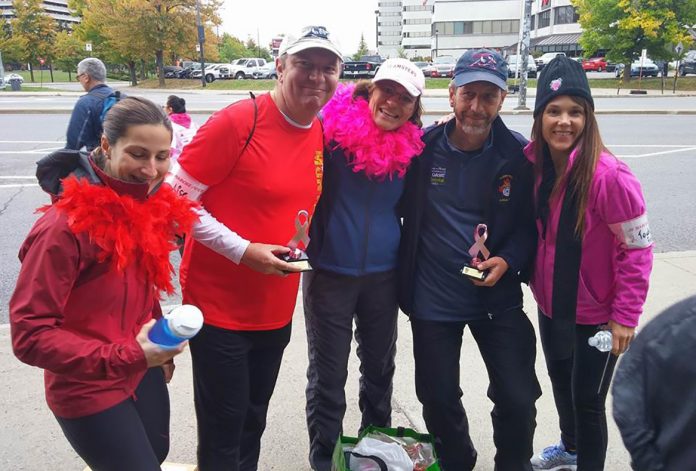 It was a crisp, sunny morning this past September 25. The mood was festive as thousands of marathoners gathered on the Jacques-Cartier Bridge for the great annual Montreal endurance event. Stéphane Morin, a proud member of Local Union 931, was among the thousands of runners participating in the prestigious Montreal Marathon for the first, second or even umpteenth time.

The Teamster gazed at all men and women waiting impatiently for the start gun and reflected on the reasons that had brought him there.

First of all, there was his father, who had died of cancer 15 years ago – a man whom he adored and still missed deeply. Then his mind turned to abused women, silent, invisible victims of a society not quite as equitable as he would like.

That morning, in the midst of all marathoners on the Jacques-Cartier Bridge, Stéphane felt ready. After all, he had spent all summer training. His mission was to raise funds for two organizations which the Teamsters Québec Women’s Caucus had been supporting for years: Le Parados, which helps victims of domestic violence and Fondation Virage, which supports people stricken with cancer.

A Teamster at Heart

Stéphane has solidarity and Teamsters blood coursing through his veins. He has worked at TD Meloche Monnex for 17 years and has been Chief Steward of Local Union 931 for 8 years. He has always tried to be a positive force in the lives of his sisters and brothers and to focus on the well-being of others. He has participated in many fundraisers and is always there in time of need.

“I felt a great sense of helplessness when my father died. This is my way of paying tribute to him, expressing my love for him and giving back to society what he so generously gave me,” explained Stéphane, who is 48 years “young”. “He taught me good values, including showing respect for others, particularly women. By participating in this half-marathon, I also wanted to help draw attention to two less visible organizations that work hard to assist people in real need.”

This courageous Teamster candidly admits that the first eight kilometres were tough, but the last 13 weren’t too bad.

“What I did is nothing compared to the blind participant who ran alongside his guide,” he stressed. “Running without being able to see – now that’s an accomplishment!”

His voice is full of admiration and humility. Nonetheless, completing the first half-marathon of a lifetime is no small feat.

Another Teamster Among the Runners

Stéphane Morin wasn’t the only Teamster on the Jacques-Cartier Bridge that morning. Patrice St-Onge, Local Union 1999 lawyer, was also participating in the marathon – and not for the first time.

Patrice has actually been running since 2008 and, on his own, has raised nearly $25,000 for these worthwhile causes!

He was inspired by the Teamsters Québec Women’s Caucus to start raising funds for breast cancer, so he decided to support Fondation Virage,

“Donations to Fondation Virage are deposited into a special account used specifically for providing assistance to Teamsters members and their families,” explained the lawyer. “My two daughters are lucky enough to be healthy, so I felt it was important to help women who are less fortunate.”

Patrice would like to thank all the generous donors who supported him on this venture.

Patrice and Stéphane managed to raise $3,500 in a very short time.

Just like thousands of other Teamsters across Canada, Patrice St-Onge and Stéphane Morin want to build unity and solidarity across Canada and make a real difference. They are asking all members of our great union to give generously to these two causes by visiting viragecancer.org (French only) and leparados.com (French only).