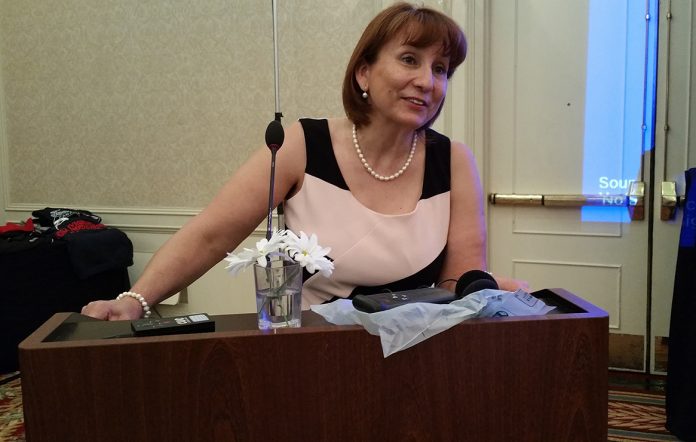 Fernanda Santos, President of Local Union 847, presenting a motion in honour of International Women’s Day before the Teamsters Canada Executive Board.

Teamsters Canada has been advocating for concrete action in the field for decades now. I’ve always believed we have to adopt significant measures and take strong action to get positive results for our members and for all Canadians.

For example, a few years ago, we decided to fight for the right of pregnant women working for companies under federal jurisdiction to receive benefits during a preventive leave. Still today, a pregnant woman who works for a company governed by the Canada Labour Code might not be entitled to compensation if she has to stop working due to concerns about her health or that of her unborn child.

This is exactly what happened to some of our Teamsters sisters in the rail industry. This aberration exists at the federal level, whereas workers under the Québec Labour Code are entitled to compensation if they go on preventive leave to protect their health and the health of their unborn babies.

We asked the Supreme Court of Canada to hear our case and are expecting a decision in the next few months. We believe this is a crucial step towards greater social justice.

Women represent 51% of the labour force in this country. This is why today, Teamsters Canada’s Executive Board is making the commitment to eliminate inequalities between men and women, to promote pay equity and to ensure women’s integration in the job market, specifically in non-traditional roles. In recognition of the critical importance of women in our society, the Teamsters Union is also committing to celebrate International Women’s Day this year, and every year.

In addition, we will soon be launching a lobbying campaign with federal elected officials to increase employment insurance sickness benefits, which have not been raised since 1971. These benefits are not paid to workers unable to reach the required 600 hours of insurable employment and when they are paid, they do little to help workers who are not likely to recover from a serious illness or injury. We will launch a national petition to put pressure on the federal government to review these benefits.

Concrete actions: this is how we build up Canada every day.

In closing, I would like to wish you all a happy International Women’s Day!