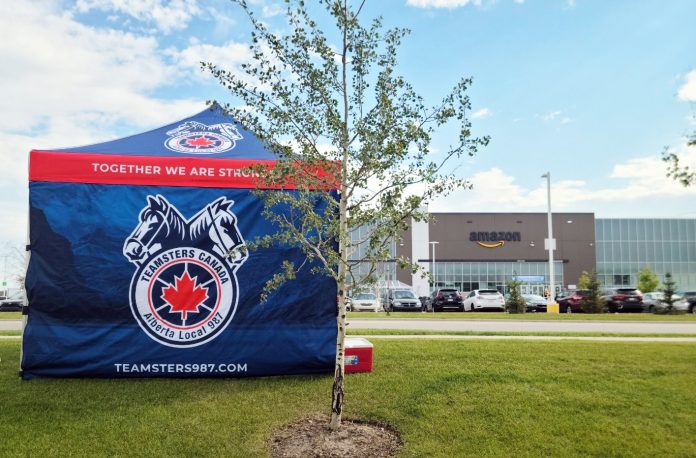 The Alberta Labour Relations Board (ALRB) will consider the application for certification and will decide at a later date if a vote should be held to determine whether these workers will be represented by the Teamsters Union.

This is the second application for certification among Amazon workers in Alberta. On September 13, 2021, Teamsters Local Union 362 applied to the ALRB for certification at Amazon’s YEG 1 warehouse in Nisku. The Union is waiting for the Board’s decision. That application was the first step in the Canadian Teamsters campaign to unionize workers at this American company.

“People at Amazon tell us that job security, the pace of work, discrimination and favouritism are major issues for them,” explains Teamsters Canada President François Laporte. “We have the resources and the ability to put a stop to those injustices, and that’s why these workers have opted for the Teamsters.”

For some time now, news reports have confirmed Amazon workers’ complaints. More and more people are questioning their work practices and what appears to be inequalities against some of its workers. Some of them in Calgary have also reported that the employer held small meetings to say they knew who had signed union cards.

Teamsters Local Union 987 has filed one unfair labour practice complaint with the ALRB related to Amazon’s inappropriate use of security guards since the Teamsters began their organizing campaign, and are likely to file another as a result of the employers continuing illegal actions..

It is common knowledge that former Amazon workers, now social media bloggers, have reported that promotions are left to the discretion of managers who may or may not be competent. In addition, 10 to 12-hour shifts would not be are not conducive to work/family balance. The rate of productivity is strictly measured, making bathroom break a luxury that workers cannot afford. Not to mention the fact that it would be almost impossible for them to sit down during their shifts.

“When I hear workers report things like that, I wonder if we’re in the year 2021 or back in the 1950s,” states Teamsters Local Union 987 Secretary-Treasurer Jim Haryett. “Those inequalities just back up the promise Teamsters made to these workers: we’re going to stand by them and support them, at their pace, all the way through this process, and help them at every step.”

The organizing campaign at Amazon was launched at the June 2021 Convention of the International Brotherhood of Teamsters. This large-scale drive is being carried out jointly by dozens of Teamsters local unions in the United States and Canada.

“Whatever the outcome of the campaign at YYC 1, the Teamsters support Amazon workers,” concludes Teamsters Canada President Laporte. “They’re not alone, and we’re not backing down.”

“We will stand by the workers for as long as it takes. »

Teamsters Canada represents 125,000 workers across Canada across multiple industries. The International Brotherhood of Teamsters, with which Teamsters Canada is affiliated, has 1.4 million members in North America. 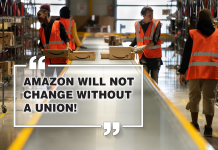 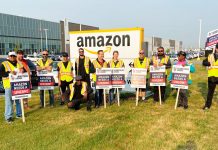