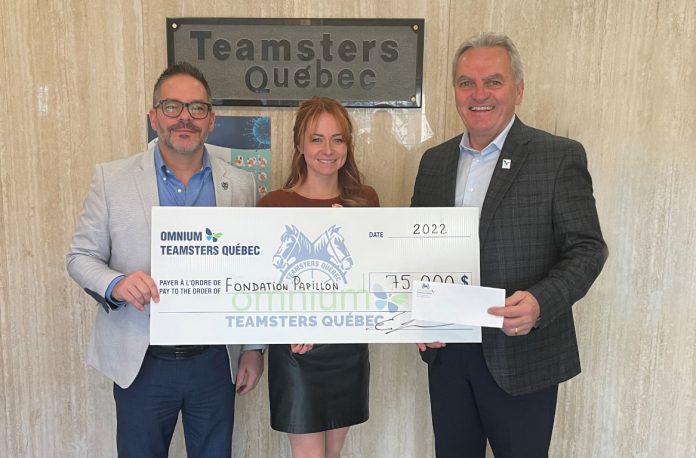 Montreal, December 21, 2023 – Teamsters local unions in Quebec and the rest of the country, along with their partners, raised $75,000 in donations to the Papillon Foundation for the year 2022.

The Papillon Foundation, a non-profit organization, is a hub of resources and support for people with disabilities, their families, and community stakeholders. It offers adapted services allowing people with special needs to reach their full potential in addition to meeting the needs of their families.

In the photo, the Foundation’s president, Jean Duchesneau (right), receives the cheque from Brother Éric Laramée (left), who organized the fundraiser, and Sister Marilyne Philie (center), of Local Union 1999.

The Quebec Teamsters established a partnership with Camp Papillon in 1982, and then with the Papillon Foundation, for a very simple reason: children with disabilities and their parents deserve to be supported. This fundraiser was first known as “L’Omnium Louis Lacroix”, after the first president of Teamsters Canada, and later became “L’Omnium Teamsters Québec”.

We would like to warmly thank all our Teamsters brothers and sisters from all local unions, our allies, our partners and all the people who participated in this fundraiser. Your involvement and generosity make a big difference in the lives of children, of fathers and of mothers.

We would also like to thank the team and all the volunteer event organizers. Without you, none of this would be possible!

From the bottom of our hearts, thank you!