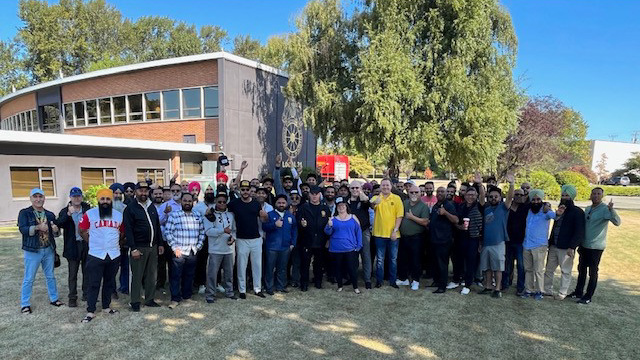 The workers are truck drivers who operate primarily at the Ports of Vancouver and the CP Rail terminal, and include both company drivers and owner-operators.

“Truck drivers are working class heroes who keep ships and trains moving. Without them, our economy stalls. I am glad to see their importance again recognized with improvements to their wages and working conditions,” commented the president of Teamsters Canada, François Laporte.

Workers won significant wage increases and an eight-hour workday, down from the nine-hour workday legislated by the Container Trucking Act. Now overtime rates start after eight hours on duty.

For owner-operators, the union negotiated an 87.5 cent per litre fuel cap, which will bring relief to rising fuel costs. It’s now the best fuel cap at the Port and Rail.

For company drivers, the union negotiated entrance into the Teamsters National Pension Plan, a first for port drivers in Vancouver, BC. The pension plan now complements the Teamsters Health and Welfare Plan initially negotiated in 2018.

“The Teamsters operate as a team,” said the lead union negotiator, Duane Bryan. “Once the strike was underway, the president of Local 31, Stan Hennessy, and our business agent, Mike Hennessy, joined the bargaining committee and helped drive home a successful contract.”

The president of Teamsters Local Union 31, Stan Hennessy commented, “I’m very proud of the bargaining committee,” he said, “They worked tirelessly on behalf of their members.”