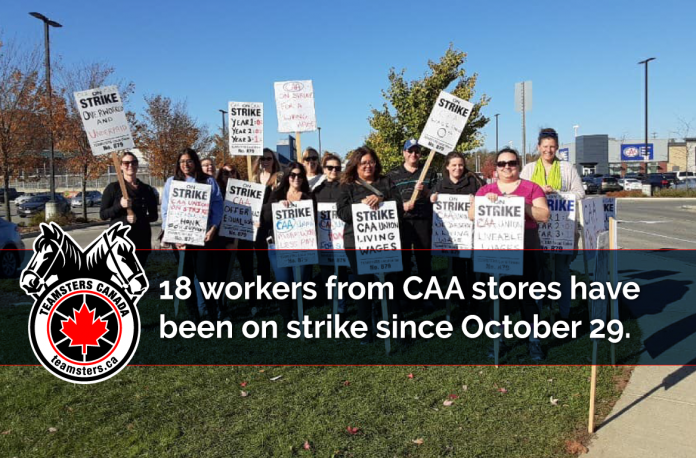 Hamilton, November 22, 2021 – Some 18 workers from CAA stores in Kitchener, Waterloo, Cambridge, Guelph and London have been on strike since October 29.

Wages are at the center of the dispute. The stores are understaffed and these members of Teamsters Local Union 879 are overwhelmed by their workload. They are also being asked to help other stores and departments, without any compensation.

CAA received the government wage subsidy and then, last January, cut its workers’ wages by nearly $3 an hour because they did not generate $75,000 or more in sales for the company in 2020.

Last year was the pandemic and the overwhelming majority of the CAA’s revenue streams, including travel, were significantly reduced.

In 2021, the workload of these workers has exploded since the gradual resumption of travel. Hours of research, planning, answering phone calls, emails, online questions, serving walk-in customers, managing trip cancellations and rebookings based on the complex requirements of pandemics and vaccines put a considerable weight on the shoulders of these Local Union 879 members.

“With the labour shortage affecting almost every industry, I am surprised that the CAA treats its workers like this,” says Teamsters Canada President François Laporte. “We are no longer in the 1980s when employers could call the shots in the labour market and treat their employees like numbers.”

The industry in which CAA operates is dominated by women. These workers need certification and training, but their pay does not recognize their skills. Dedicated and efficient, they do not hesitate to go the extra mile for their customers to ensure their satisfaction and safety.

“The company’s offers at the bargaining table are laughable: a 1% increase on a 3-year contract,” explains Teamsters Local Union 879 President John McCann. “Yet, consumer prices have increased significantly over the past 18 months. As a result, management proposals are making our members poorer.”

This labour dispute also raises a troubling question about the culture of the company as experienced workers have left their jobs in recent years because they felt unsupported in their day-to-day duties.

“Our members contribute to CAA’s success and enviable reputation with its customers, but they feel disrespected by the company’s leadership,” says McCann. “We are certainly not going to apologize for asking for decent raises.”

This labour dispute puts the reputation of the company, which prides itself on “continually striving to enhance its value to members and associates and ensure that they are socially responsible,” at risk.

“A company’s social responsibility begins with how it treats its workers,” adds Teamsters Canada president. The CAA has an opportunity to demonstrate this by going back to the drawing board.”