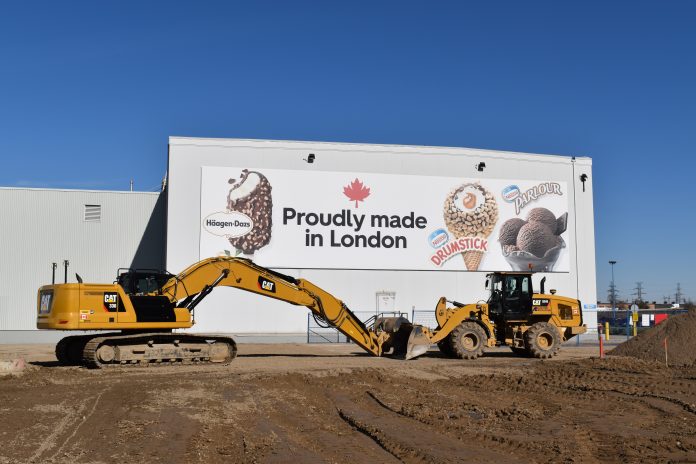 On Friday, November 5, 2021, Nestle ice cream factory hosted its groundbreaking day for the new expansion to the current plant in London, Ontario.

Following the previous 51.5 million dollar expansion back in 2018, Nestle Canada has now invested 41.3 million dollars into this new section of the factory.

Growth at Nestle’s London plant has been a continuous effort, made possible by the hardworking members and workers that keep the factory running and delicious ice cream production going despite the struggles they have faced during the pandemic.

“That’s the strength of this place. Everyone stepped up and got it done—it’s a testament to the people,” says Brent Guest, Chief Steward at the Nestle plant.

“We’re looking forward to the expansion,” says Helen Medeiros, a member of Teamsters 647 and a worker at Nestle for over twenty years. “It’s a great opportunity.”

Teamsters Local Union No. 647 is optimistic about to the new full-time jobs and prospects this expansion will create for local, hardworking Canadians and the upcoming generations in London’s vast and diverse community.

“When it comes to making ice cream, our Teamsters members working at the Nestle plant prove to be the best all around the world,” says Carl Davis, Secretary-Treasurer of Local 647 and Business Agent for the Nestle plant. “This new investment will not only add over one hundred new full-time members, but also provides job security well into the future for over six hundred and fifty existing members that can count on a good living wage, a good pension and great benefits.”