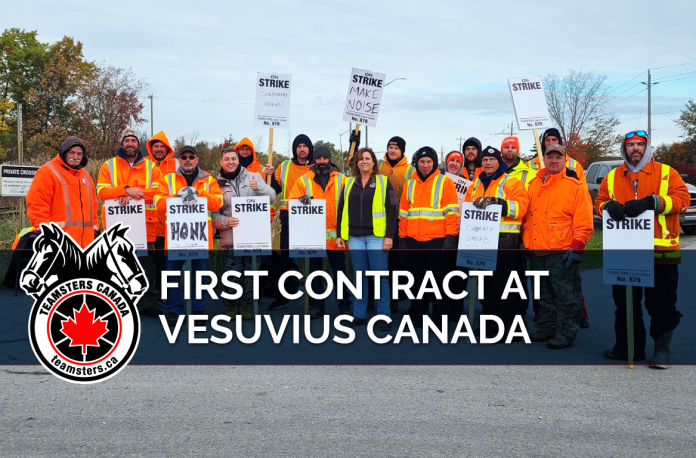 Welland, November 7, 2021 – Workers at Vesuvius Canada, on strike since November 1, have secured their first Teamster contract. Ninety per cent of the members of Local 879 ratified the new contract this weekend.

Highlights of the contract include a $2 wage increase, a second-year bonus and the elimination of mandatory overtime.

“These workers went on strike because the employer’s offers were clearly inadequate,” explains Teamsters Canada President François Laporte. “They stood together and finally obtained a collective agreement that met their expectations.”

After a week on the picket line, the company came to their senses and a tentative deal was reached on November 5th.

“I would like to thank all those who supported us on the picket line,” adds Local Union 879 President John McCann. “Congratulations to Brothers Ken Noyes and Derek Collins for their leadership. I would also like to acknowledge the work of Sister Lenna Phenix and Brother Jim Killey as Chair and Co-Chair of the Negotiations Committee.”

It is by staying strong and united that workers can achieve the best possible collective agreement.

Vesuvius is a global leader in metal flow engineering, providing a full range of engineering services and solutions to customers around the world, primarily serving the steel and foundry industries.