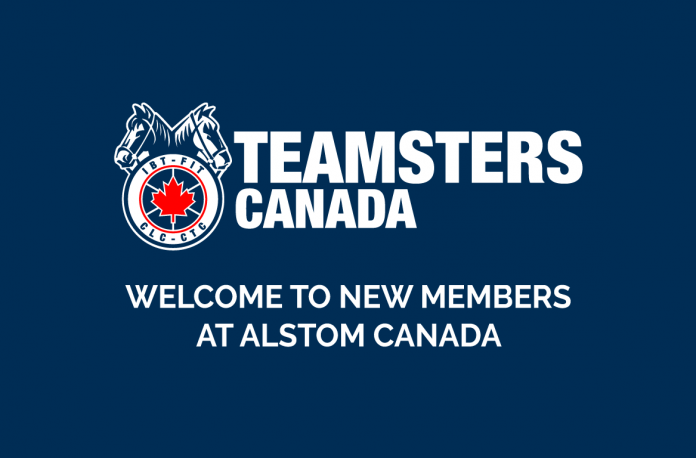 The vote was 80% in favour of union representation.

“I would like to congratulate our new members on their organizing victory in the middle of a pandemic, and welcome them to our great union,” said the national president of Teamsters Canada, François Laporte. “We must now negotiate a first collective agreement to begin addressing the issues facing Alstom workers in Brampton.”

“I salute these Alstom workers for their courage and determination. This union stands in complete solidarity with them and will fight to see their legitimate concerns addressed,” added Craig McInnes, president of Teamsters Ontario Joint Council 52. “We are united to protect, not combined to injure.”

Unfair treatment, no respect for seniority, arbitrary management decisions, inconsistent policies and favoritism were among the chief complaints.

Some workers were paid different wage rates despite being hired at the same time and performing the same work. Other workers, with years of experience, were paid less than those who had just been hired.

Job posting were not consistently displayed at the plant, which led to some being unfairly allocated better shifts and higher-paying positions.

On top of addressing issues like these, workers at the plant also hope to improve wage rates and benefits across the board while strengthening job security.

Organizing during a pandemic

Union organizing isn’t straightforward during a pandemic. No indoor face-to-face meetings meant union organizers could not meet large numbers of workers at once. Leafletting was also out of the question, as organizers feared it could spread the virus.

Instead, meetings with small groups of workers were held in parking lots at appropriate physical distances, where participants were coached on how to get others on board with the union drive. Union organizers guided these workers regularly via phone calls and WhatsApp, providing them advice and electronic organizing materials.

The labour board also had to conduct the union vote via online and telephone voting; an in-person polling station in the workplace would have been too risky.

“We got a nice suntan out of all these parking lot meetings with Alstom workers,” joked Fitos Vritsios, an organizer with Teamsters Canada who helped Alstom workers unionize. “Ultimately, the pandemic kept union staff away from workers, forcing us to take an even more grassroots approach by turning Alstom employees into Teamster activists.”

“Organizing is the lifeblood of the labour movement and we are very happy with how this ended up playing out,” said Wade Philips, Eastern Region Director for the TCRC-MWED. “There will require a great deal of work from both our members at Alstom and the executive board in the coming months, but we are up for the task and look forward to working together for many years to come.”