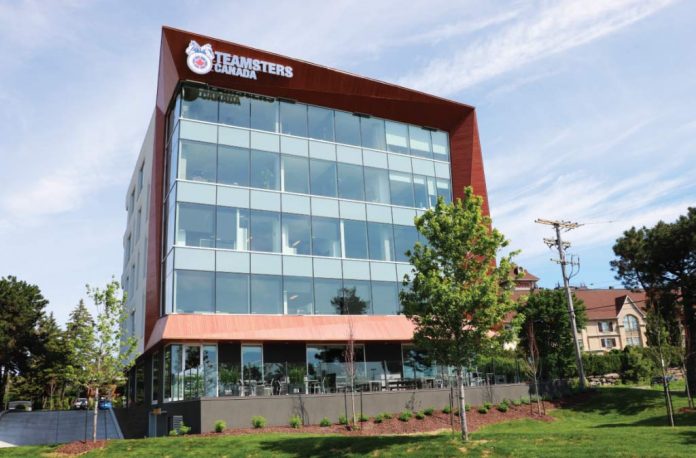 Teamsters have a new home in Canada! Earlier this month, the new Teamsters Canada National Office was dedicated in Laval, Québec.

The five-storey building is owned entirely by Teamsters Canada and its members. The union is occupying the top two floors and renting out the bottom three. Tenants include an actuarial firm that manages the Teamsters Canadian Pension Fund, an insurance company that administers many members’ health and welfare plans, and offices for employees of a credit union. Prior to moving into the new building, Teamsters Canada was itself a tenant in a large office tower.

The new building is located at 1750, rue Maurice-Gauvin in Laval, less than 3 km away from the old office. The new location offers incredible visibility; drivers heading north on Highway 15 in Laval can’t miss the large Teamsters Canada sign mounted outside.

The building was built using 100% union labour and Teamster members were put to work on the project at every possible stage. Special efforts were also made to use as much Canadian building material as possible.

It was Teamsters Canada President François Laporte’s idea to build a new national office. The proposal was unanimously supported by the National Executive Board.

“A year ago, this place was just a large construction site. Today, it’s a beautiful building, a home for all our members, and a source of visibility for our union. I would like to thank all our staff members, all the construction workers and our National Executive Board for their hard work and for making this day possible,” said Laporte at the ribbon-cutting ceremony.

“This is a great day for all Teamsters. I’m proud to work with Teamsters Canada on so many important issues, and I’m proud to be here today to celebrate this important moment. The members now have an official home in Canada; a permanent symbol of our great union’s presence in Canada,” Hoffa said.

“This building is a solid investment for members that will provide financial stability for decades to come. The International Brotherhood of Teamsters dedicated its own building in Washington, DC over 64 years ago. It has served us well, and I have no doubt your new building will serve you well too,” Hall said.