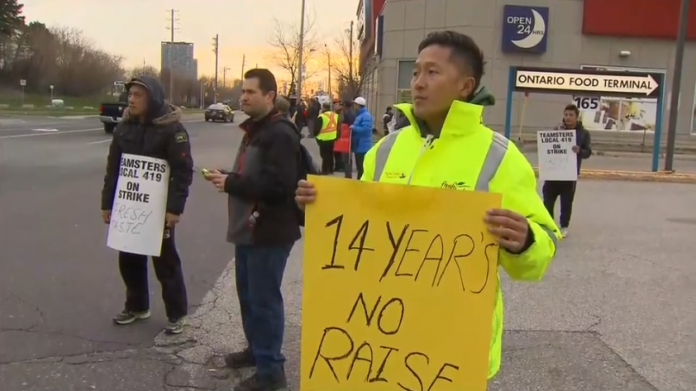 The 12 workers at Fresh Taste Produce in Etobicoke want little more than a fair day’s wage for a fair day’s work. But after joining Teamsters Local Union 419 last November and trying to negotiate their first collective agreement in good faith, they realized they had no choice but to go on strike.

“Unfair wages are the biggest issue,” explained business agent Ken Dean. “Fresh Taste hasn’t given a raise to some of their staff members in years. In fact, their longest-serving worker is also the lowest-paid person at the company.”

“We’ve hammered out almost all the details of the new agreement,” continued Dean. “But we’ve reached a major impasse on the monetary issues.”

The Teamsters are eager to get back to the negotiating table, but the company has so far refused.

Tensions on the Picket Line

Unfortunately, managers at Fresh Taste Produce had little patience for the struggling workers. They’ve been involved in several heated arguments on the picket lines, and in one incident, a car driven by a manager’s son was recorded ploughing through the picket line.

“Running people over won’t help end this strike,” said Franҫois Laporte, the President of Teamsters Canada. “I want our striking sisters and brothers to know they have the support of over 120,000 fellow Canadian Teamsters.”