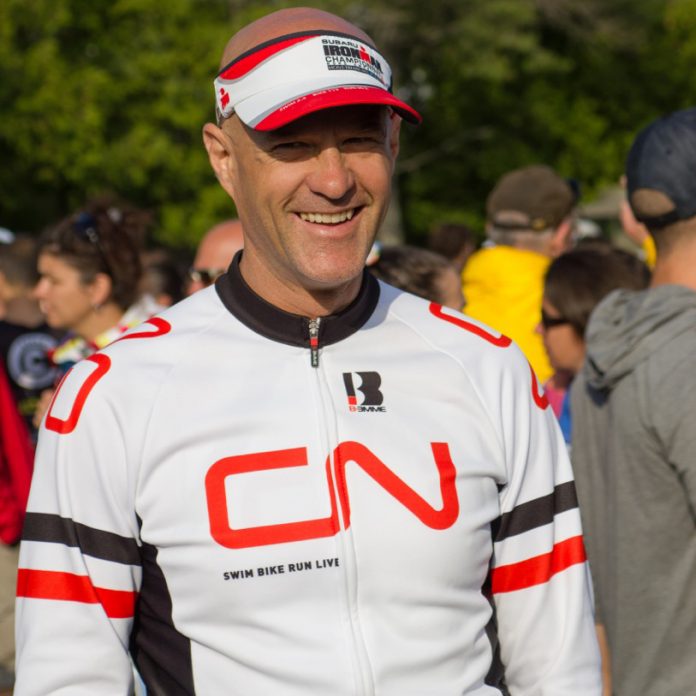 Besides taking care of his family and the members of Division 91 of the Teamsters Canada Rail Conference (TCRC), Sylvain Morin runs marathons for a good cause.

“Sylvain Morin is a machine. He never stops,” says Maxime Fichaud, a 28-year-old Québec Provincial Police employee living with Hodgkin’s disease. “I was diagnosed two years ago, and when Sylvain heard the news, he decided to do something about it.”

The labour activist, who had decided to get back into shape following the amputation of several toes on his right foot after an unfortunate rail accident, was looking for a cause. Maxime provided the inspiration.

“Maxime gives me one more reason to stay in shape but, more importantly, he drives me to advance a cause I care about,” explains the Canadian National locomotive engineer. “So I started raising funds for the Leukemia & Lymphoma Society of Canada” (LLSC).

A cancer of the lymphatic system, Hodgkin’s disease is a type of lymphoma. Most people are familiar with it because former hockey player and owner of the Pittsburgh Penguins Mario Lemieux was diagnosed with this disease in 1993. This cancer is characterized by swollen lymph nodes and the treatment usually involves chemotherapy and in some cases a bone marrow transplant. Maxime now needs such a transplant.

“At first, chemotherapy was effective, but the cancer came back a few months ago,” says Maxime Fichaud. “So now I have to go through more chemotherapy before I can have a bone marrow transplant.”

“Sylvain is the number one individual fundraiser for the LLSC,” explains Isabelle Lalonde, coordinator and trainer for the LLSC’s Team in Training. “Sylvain is very serious about his training and the cause he supports. It’s become a way of life for him, and that’s the secret to his success.”

Sylvain is far too humble to say this publicly but the fact is that he alone has raised $150 000 in just four years. Of course, many of his co-workers helped him by making weekly contributions to the CN Employees’ and Pensioners’ Community Fund .

“The CN Employees’ and Pensioners’ Community Fund was set up to raise funds through a payroll deduction program,” explains CN’s Chantal Lauzon. “Canadian National pays all the administration fees associated with this program. This means that all the funds raised, in other words, $1 million per year, go directly to the various charities.”

For its part, the Team in Training (TNT) program tries to encourage people like you and me to participate in endurance races in order to raise funds for the LLSC.

But Sylvain doesn’t just run endurance races. He participates in triathlons, like the one in Hawaii. On June 21, he took part in the half-Ironman in Tremblant and will be heading to Austria in August for the Ironman World Championship. His feats are nothing short of amazing because only 137 Canadians are participating.

To date, Sylvain has participated in 9 marathons, 4 triathlons, 3 Half Ironmans and 2 Ironman.

“I have to admit that an Ironman is a huge challenge,” says Sylvain. “But once the race is over, the sense of accomplishment and the satisfaction of contributing to an important cause make you forget everything you had to go through to get here.”

Montréal ranks fourth among Canada’s leukemia and lymphoma research hubs. For instance, Maisonneuve-Rosemont Hospital has cutting-edge equipment and highly skilled researchers in the field. It has also been home to the Centre for Excellence in Cellular Therapy (CECT) since 2013.

The CECT conducts world-class research on stem cells, immune systems and cancer with a view to developing treatments for various diseases, in particular leukemia and lymphoma.

However, research and equipment are costly endeavours and that’s where the Leukemia & Lymphoma Society of Canada comes in.

To help with the fundraising, Sylvain has created a web page for donations.

“Sylvain is a machine,” repeats Maxime Fichaud at the end of our phone conversation. “He’s the hero, not me.”

To build Canada one day at a time, we need heroes like Maxime, Sylvain, Isabelle Lalonde and Chantal Lauzon.

Teamsters Canada has contributed to Sylvain Morin’s fundraising campaign and is inviting its 120 000 members, local unions and conferences to do the same.

Teamsters Canada supports heroes. So do I. What about you?