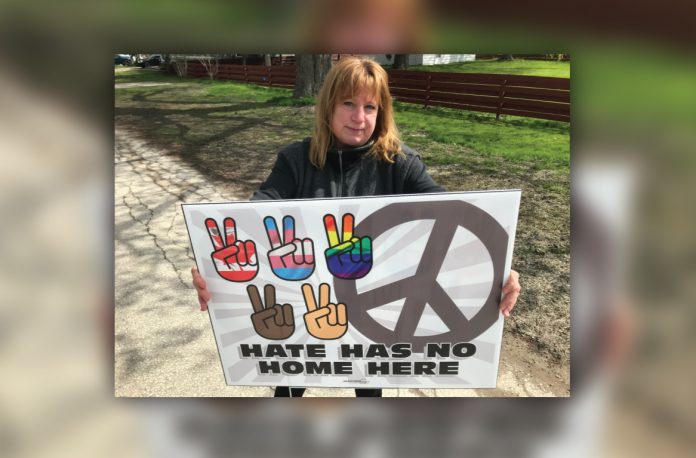 Laura Hasulo, a long-time Teamsters Union member and train conductor at CN Rail, is leading an anti-hate campaign in her community. The campaign consists of her and a group of neighbours distributing “Hate Has No Home Here” lawn signs in and around Essex, Ontario.

Hasulo had long worried about hate in her community and around the world. But she became furious after a local politician tweeted racist anti-Asian comments and doubled down on them the next morning on a local radio station.

After the incident, she and a group of neighbours put their heads together. They wanted to respond to the nastiness with positivity. But above all else, they wanted to visibly support victims of hate and show that their community is inclusive.

“We wanted to show Asian people, and the rest of Essex, that there is no room for hate in our community. Then we thought about making the sign, and realized that there are a lot of marginalized people who don’t feel like the community has their back. Trans kids, black people, indigenous people, it’s a lot of people,” explained Hasulo.

“So we thought we would make the sign all-encompassing, so that when people drive around here, they know that hate has no home in our community.”

Hasulo’s plan was to sell the signs for $10 to cover production costs and raise money for her local library’s diversity initiative, which aims to make books written by LGBTQ people and people of colour available to children in her community.

The first 100 signs sold within 24 hours and attracted attention from a local radio station, CTV and CBC. Now, Hasulo is on track to distribute over 700 signs. Orders have come in across the province and even as far away as Florida.

Hasulo thinks the signs show there are good people everywhere, and that most Canadians stand with the victims of hate.

“The signs really resonated,” she said. “Most people watch the news and feel helpless. They see horrible things, they hear Trump-like politicians say horrible things, thinking that they would never act like that! But with these signs, we can at least show marginalized people that we have their backs.”

The campaign details can be found on their Facebook group “Hate Has No Home Here Movement.”