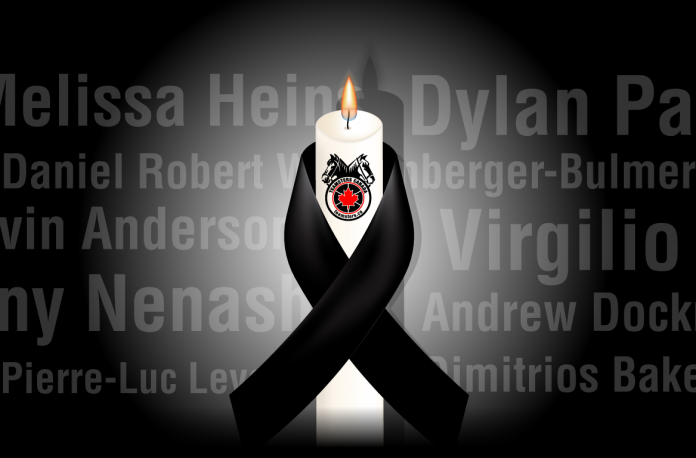 Today is the National Day of Mourning, a day to remember those who died, or were injured or made ill, from their work. It is also a day people are asked to recommit to improving health and safety and preventing tragedies in the workplace.

Since November 2017, we have lost eight of our sisters and brothers to a range of accidents and derailments in the rail industry.

Nobody should expect or accept so many tragedies in such a short amount of time. The Teamsters Canada Rail Conference (TCRC) published its own letter to commemorate the Day of Mourning, which includes more details and information on how railroaders are remembering.

Our other affiliates are doing their part, too. Today and tomorrow, Local Union 419 will be paying tribute to Virgilio Bernardino, a warehouse worker at Versacold in Toronto who died after being crushed by falling debris in 2003. Follow their Facebook page for pictures of the commemoration.

Work-related tragedies are on the rise in Canada. According to the latest statistics, the number of workplace fatalities rose from 905 in 2016 to 951 in 2017. Close to half of these fatalities occurred the transportation, construction and manufacturing industries, which collectively employ the bulk of our members.

Beyond the statistics and the individual lives lost, we must never forget that these tragedies affect scores of family members, friends and co-workers.

Many people are still unaware of the significance of April 28. I invite everyone to raise awareness about the National Day of Mourning by sharing this post or the countless others you will come across today. You can also light a candle or wear a black ribbon in honour of those we lost, or attend one of the many Day of Mourning ceremonies held across the country.

But most importantly, you can honour the memory of those we lost by fighting for safety of the living. That means getting involved in health and safety committees, focusing on prevention, and never being afraid to speak up when you see something dangerous at work.

All accidents are preventable, and our union will always be there for those who stick up for safety.