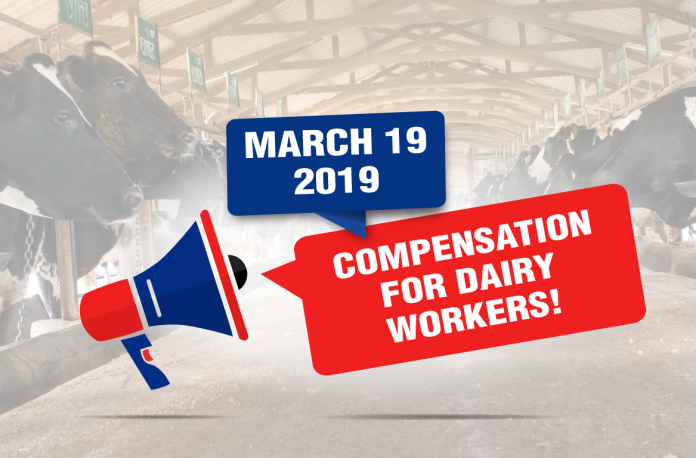 Laval, QC, March 11, 2019 – Teamsters are calling for dairy workers to be compensated in the upcoming federal budget for losses from recent trade agreements. The union represents 5,000 dairy workers in Canada in the dairy processing sector and in bulk milk and dairy product transportation.

“If a government finds it is necessary to compensate an industry for harm caused by a trade deal, then they should also explicitly compensate workers,” explained François Laporte, President of Teamsters Canada. “Compensating businesses will not help workers who lose their jobs. The benefits do not trickle down.”

The impact of CETA, the CPTPP and NAFTA 2.0 (CUSMA) on Canada’s dairy sector is cumulative and severe. Close to 10% of the Canadian dairy market – the equivalent of a quarter of a billion dollars annually – has been sacrificed on the altar of these free trade agreements.

Workers deserve access to training funds to upgrade skills within the dairy sector. If they lose their jobs, they need funding for skills upgrading in addition to those available through existing programs, or funds to help older workers bridge into retirement with dignity.

“Workers need to be part of the picture. But the compensation package for the dairy industry is being negotiated in secret between the federal government and big business. Ottawa has inexplicably chosen not to consult unions on the issue,” said Paul Barton, Director of the Teamsters Canada Dairy Division.

The next federal budget is set to be tabled on Tuesday, March 19.