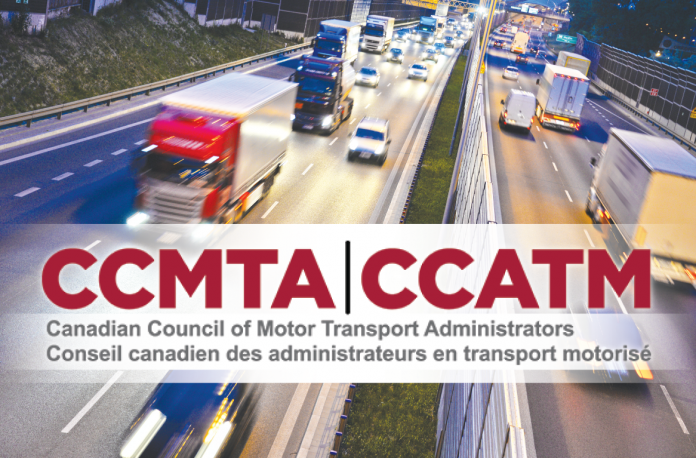 The annual meeting of the Canadian Council of Motor Transport Administrators (CCMTA) came to a close last Wednesday. The CCMTA is responsible for the coordination, administration, regulation and control of road transportation and road safety across the country. Its members include government decision makers, including federal and provincial transport ministers, representatives from the American Department of Transportation, as well as representatives from the trucking industry.

Leo Laliberté from Teamsters Local Union 106 and Stéphane Lacroix from Teamsters Canada were present, along with Johanne Couture from the Owner Operator Independent Drivers Association (OOIDA). These three individuals were the only ones representing transportation industry workers at this important meeting. Unfortunately, brother John McCann, our National Freight Director, had to attend to a family matter. Teamsters Canada’s lobbyist Phil Benson had to attend a Senate Committee on autonomous vehicles so neither could participate in the CCMTA meetings.

This year, the event was held at Québec City Convention Centre. Discussion ranged from road safety, the use of electronic devices in vehicles, the legalization of cannabis, automation, electronic drivers’ licences and harmonizing a diverse array of national and territorial regulations.

Teamster representatives took part in several workshops and conferences for updates on how the industry is changing, all while striving to make workers’ voices heard by the different stakeholders at the CCMTA.

Experts on road safety demonstrated how road users are insisting on using cellphones while driving – despite governments levying heftier fines with more demerit points. They also explained studies that show how on-board systems, like built-in navigation consoles, still aren’t being designed to limit interactions between the driver and the system, thus considerably increasing the risk of accidents.

Let’s be frank – using a cellphone while driving is both dangerous and illegal. When you start your car or your truck, your device should be stowed until you reach your destination.

For truckers, cellphones aren’t the biggest problem. Statistics from police forces across Canada show that truckers get more fines for seatbelts than for using electronic devices.

Despite warnings, open letters and interviews given by the Teamsters, legislators will soon allow fleets of autonomous vehicles on our roads, even as the technology has yet to be proven safe.

The obsession with self-driving vehicles that seems to have taken some of our government officials doesn’t seem to be dying down. We can only hope that legislators, both in Canada and the United States, will finally understand the importance of strictly regulating these supposed innovations before an accident takes someone’s life.

The labour shortage which continues to hurt the trucking industry was not directly discussed at the CCMTA meeting. Teamster representatives did not hesitate to tell different company and government representatives that a large number of the challenges facing this industry stem from bad working conditions that make the industry unappealing to jobseekers.

We also noticed that North-American regulations are gradually becoming harmonized with US norms, especially when it comes to the transport of dangerous materials. Canadian authorities can’t do much about this because of how integrated the Canadian and US economies are.

In conclusion, leaders from the Teamsters Union from Canada and the United States will continue working with company and government decision makers in hopes of making sure transportation workers’ voices are heard.