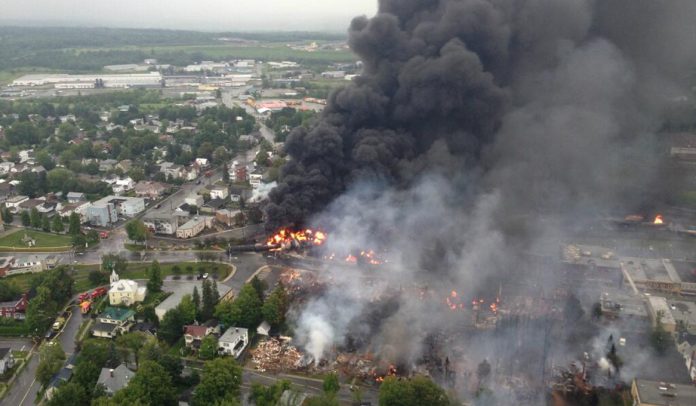 Laval, January 19, 2018 — The Teamsters Union is relieved by the acquittal of three Montreal, Maine & Atlantic workers who were accused of criminal negligence causing death in the Lac-Mégantic derailment. The lengthy trial highlighted major shortcomings in the rail industry and the Teamsters believe it is now time for Transport Canada to act decisively to ensure the safety of the general public and of workers.

“Installing cameras to monitor train workers does nothing to improve safety in this industry, warned Teamsters Canada President François Laporte. Increasing safety requires hiring railway inspectors, allowing workers to rest when they are tired, and most importantly, monitoring the rail carriers very closely as well as ensuring a transparent public consultation before granting a rail carrier an exemption to a safety rule.”

“These are the types of measures that will reduce the risk of such a tragedy happening again.”

The evidence filed by the Crown apparently failed to convince the jury: after deliberating for nine days, they returned with a unanimous verdict of “not guilty”.

“My thoughts are, once again, with the families and friends of the victims of the tragedy, said the Union leader. I simply want to tell them that I strongly believe this disaster was caused by a careless employer and that justice will be done when the criminal trial of the MM & A is over.”

The Teamsters union represents close to 125,000 workers across Canada, including 12,000 workers in the rail industry. The International Brotherhood of Teamsters has 1.4 million members in North America.