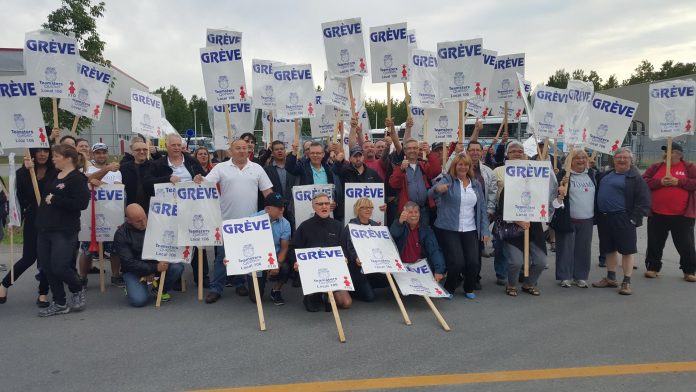 UPDATE: Victory! The strike at Transdev affecting CIT Laurentides is officially over. The new work contract was approved by 90% of the workers and bus service is set to resume tomorrow (Wednesday) morning.

Laval, June 6th 2016 – Some 125 bus drivers employed by Transdev and who serve the Conseil intermunicipal de transport des Laurentides (CIT or Laurentian Intercity Transportation Council) will be on strike as of tomorrow at 4:15 am. The labour dispute, which involves members of Teamsters Local Union 106, stems from management’s unwillingness to offer better wages.

The walkout will affect intercity and intermediary transportation in fourteen municipalities.

Transdev provides public transportation services for more than 372,000 people in the Laurentians, including the cities of Blainville, Boisbriand, Rosemère, Saint-Eustache and Sainte-Therese. A total of 6.3 million bus rides were made on the CIT’s network in 2013.

The workers are asking for a raise because their previous contract, which had a ten-year term, puts their wages far below what other intercity carriers currently offer. Other aspects of their contract, such as days off for family-related responsibilities, are also at the centre of the dispute.

According to the agreement between the Laurentian CIT and Transdev, the company has 72 hours to resolve the conflict. Otherwise, they risk losing the business.

The previous collective agreement expired on December 31st. Thirty-five meetings with a conciliator failed to resolve the impasse between the parties.

A spokesman for the Teamsters Union, Stéphane Lacroix, will be available for interviews near the Transdev garage in Boisbriand as soon as the strike begins.

Cities affected by the labour dispute:

Who: Stéphane Lacroix, Director of Public Relations & Teamster Spokesman
Where: 4243 Marcel-Lacasse St., Boisbriand QC J7H 1N4
When: From June 7th at 4:15 am
Contact: See below

Transdev is one of the leading global players in public transportation, with a fleet of 43,000 vehicles and a presence in 19 countries.