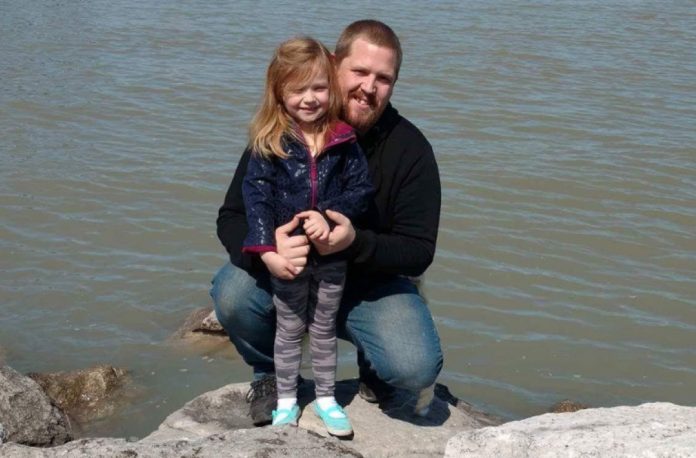 When life throws you a curveball, it helps to have people backing you, be they friends, family or your fellow union members. Just ask Josh Alexander, a truck driver and member of Local Union 879 at Moe’s Transport in Windsor, ON.

Life threw Brother Alexander a curveball in 2016. Josh was driving back to Canada from Michigan on the last leg of an international run when he pulled over to get some rest before arriving at the border. He was awakened 30 minutes later by the local sheriff, who wanted to know about a recent nearby fatal motorcycle accident.

Josh knew nothing about what had happened, but was nonetheless accused of being involved in a deadly collision and fleeing the scene. The young single father was ultimately detained, charged, and thrown into a legal nightmare.

The police tested the truck for signs of an accident and found nothing, besides some animal blood stains and paint scratches that did not match the motorcycle. Moreover, an expert who examined the truck’s onboard GPS concluded that Josh was parked almost 10 km away from the accident site at the time of the crash.

The only evidence against him was an “eyewitness” who said he may have seen a white Moe’s Transport truck leaving the scene of the crime.

Despite the sketchy case against him, Josh was banned from entering the United States pending his trial. His wages plummeted. A judge labelled him a flight risk and levied a US$100,000 bond against him. His legal feels quickly started piling up.

Teamsters Local Union 879 set up a Go Fund Me page early on in the process. His Teamster sisters and brothers, co-workers, friends and family gave thousands of dollars. Teamsters Canada, other local unions and Josh’s employer also donated money outside of the online campaign.

The Teamster-led fundraising effort brought in over $40,000, enough to offset almost half of Josh’s legal bills.

Suddenly, just before Josh was scheduled to go to court, the “eyewitness” was himself accused of fabricating the whole thing. The case against Josh collapsed and charges were dropped.

Josh recently wrote to John McCann, president of Local Union 879 and the man behind the fundraising effort, to give him an update. In his email, we learnt that the so-called “eyewitness” is now facing charges of perjury and lying to police.

“The union helped me with […] legal costs,” wrote Josh. “I appreciate everything that you and the brothers and sisters in the local have done for me. My family and I will never forget it.”

Life can sometimes be unfair, especially on the job. That’s why union solidarity is so important, and why Teamsters are proud to stand for justice and fairness at work.

Brother Alexander has been fully exonerated. While his legal troubles are over, the financial impact remains. Please donate to help him further offset his legal costs.