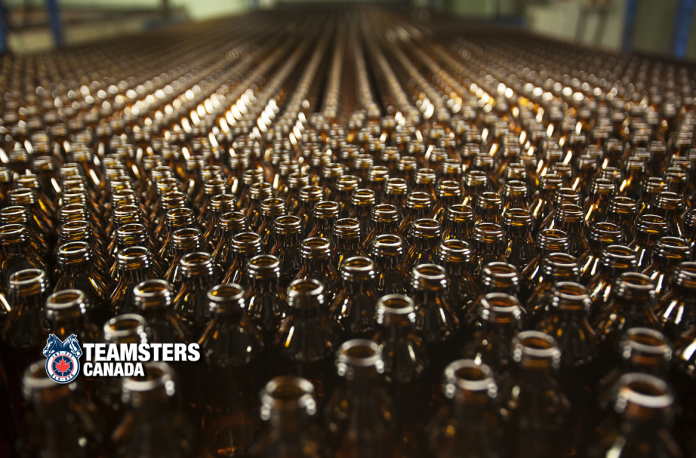 Laval, October 16, 2017 — The Teamsters Union believes that the new minister of Sustainable Development, the Environment and the Fight Against Climate Change, Isabelle Melançon, will have a lot on her plate in the coming months, particularly with the promotion of the capped brown bottle.

In fact, the Teamsters Union, which represents over 1,500 workers employed by the Molson and Labatt breweries, among others, estimates that hundreds of jobs in the brewing industry are threatened because of the move toward cans a few years ago.

In their constant search for ways of boosting market shares and profitability for their shareholders, major brewers have decided to follow the North American trend and offer more of their beer production in cans.

However, it is estimated that nearly one out of three cans ends up in a landfill site, which defeats the principles of sustainable development and exacts a toll not only on Canadian resources, but also on Quebec municipalities, which must often pay dearly to get rid of their waste.

“Landfilling 440 million unrecovered containers is very costly and causes pollution,” explained the President of Teamsters Union Local 1999, Michel Héroux. “And this situation will only get worse, since the government’s failure to renew the Recyc-Québec agreement, which expired in 2016, could tempt brewers to produce and sell beer only in cans.”

And yet, the advantages of brown bottles cannot be denied: they are recovered at a rate of 98% and reused up to 17 times each.

The Recyc-Québec agreement is dead

Brewers, soft drink manufacturers and retailers are all bound by the Recyc-Québec agreement, which underpins the deposit-refund system in place in Quebec since 1984. This agreement stems from the Act respecting the sale and distribution of beer and soft drinks in non-returnable containers.

Until last year, brewers paid penalties when they sold more than 37% of their beer production in cans. But is this still the case? In addition, the non-renewal of the agreement has created a regulatory void that may encourage brewers to produce only beer cans.

It should be pointed out that 55% of beer production in Quebec is sold in cans. Relatively unscathed by government fines, brewers continue to favour the aluminum container.

The recently announced construction of the new Molson plant, combined with the expiry of the Recyc-Québec agreement, could lead to the complete disappearance of brown beer bottles. As a result, close to 150 well-paying jobs would be eliminated upon the opening of the new plant. This is a conservative estimate – and we’re only talking bottling jobs.

“Cans are not environmentally friendly – period!” said the union leader point blank. “The government must demonstrate its commitment to protecting the environment by letting Quebecers know how it plans to promote the brown bottle and convince brewers that producing more cans is socially unacceptable.”

Teamsters leaders sent a letter to the new minister requesting a meeting to discuss the issue.

“It is important that we meet with the new minister as soon as possible, because Molson, for example, will soon be making decisions that will have an impact on jobs and the environment,” concluded Mr. Héroux. “We are prepared to work with her to find solutions benefitting all parties, provided they are profitable for the community and, of course, our members.”

The brown bottle in a nutshell:

The Teamsters Union represents the interests of nearly 125,000 members in Canada, including 45,000 in Quebec. The International Brotherhood of Teamsters has 1.4 million members in North America.