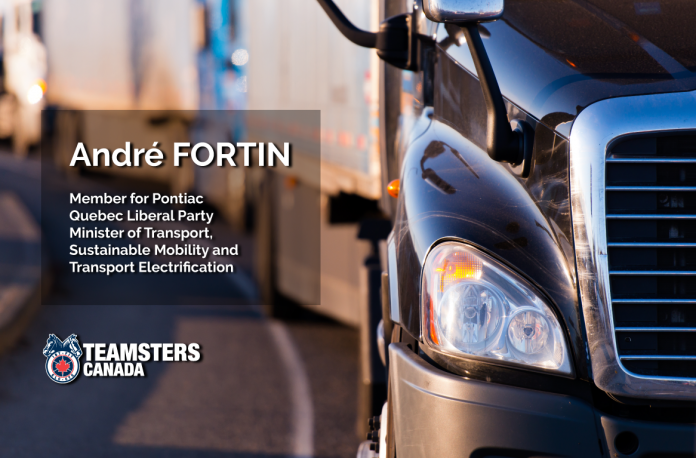 Because this department oversees the trucking industry – the backbone of Quebec’s economy – it is vitally important to the province.

According to the Teamsters, who represent some 5,500 truckers in Quebec, the trucking industry is at a crossroads, and a meeting with the new Minister of Transport as soon as possible is imperative.

The union’s leaders want to talk with the Minister about issues that weaken the industry, particularly truckers’ driving hours, highway infrastructure, highway safety statistics, and a possible rush-hour ban on trucks on the island of Montréal.

“For truckers, the highway is the office,” explained Jean Chartrand, President of Teamsters Local Union 106. “Every day, our members – and all truckers – deal with traffic jams and highway construction, in addition to being squeezed like lemons to deliver goods within deadlines that are often unreasonable. Their working conditions are very tough.”

“We want to meet Minister Fortin soon, so that we can talk about these issues and take remedial action that will benefit not just our members, but everyone on the road.”

While much of the trucking industry is federally regulated, certain issues fall under provincial and municipal jurisdiction, and the Teamsters want to meet with all industry stakeholders in the upcoming weeks and months.

“The cabinet shuffle opens the door to a new approach and new solutions,” concluded union leader Chartrand. “We look forward to meeting Minister Fortin, and we wish him every success in his new portfolio.”