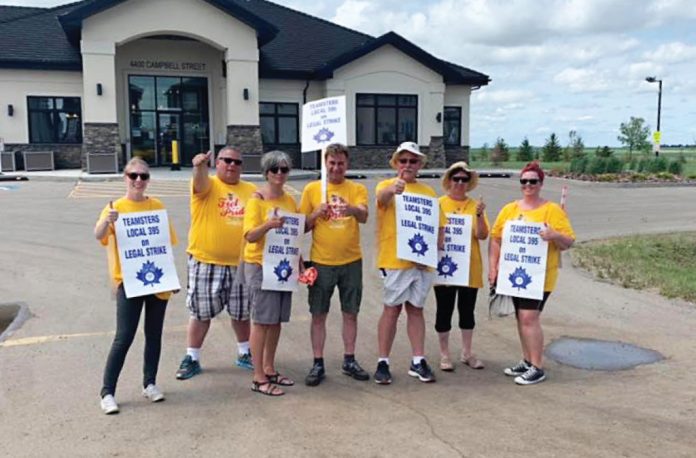 RM of Sherwood, SK – Four office workers at the Rural Municipality of Sherwood have been on strike for over six weeks. The dispute is over the roughly $10,000 it would cost to give the small staff a 2% raise in 2019 and 2020. The RM is resisting and has opted to pay a consultant $45,467 since 2018 to try to negotiate a two-year wage freeze and manage the RM’s labour relations.

“The RM of Sherwood has spent over four and half times as much money fighting its own workers than it would cost to give their people a modest raise. It’s a shocking display of greed, pettiness and mismanagement,” said the president of Teamsters Canada, François Laporte. “I call on the RM of Sherwood to settle this strike and put an end to their failed labour relations strategy.”

The $45,467 figure is the total amount of amount of money the RM of Sherwood has paid to its labour relations consultant since the beginning of 2018. The consultant handles all labour relations matters for the RM. Other than the four striking office workers, the RM currently only employs eleven other unionized blue collar workers, four of whom are seasonal. There have been no cases sent to arbitration for at least five years.

The RM’s unionized workforce is represented by Teamsters Local Union 395.

“Despite having an army of managers, the RM of Sherwood is forcing us to negotiate with an outside labour relations consultant who has clearly lost control of the situation,” said Randy Powers, President of Teamsters Local Union 395. “I’m amazed that this consultant and all these bureaucrats are so opposed to giving four office workers a modest raise.”

The four striking office workers’ collective agreement expired on December 31, 2018 and negotiations began shortly thereafter. They have been on strike since June 24, 2019.

Teamsters Local Union 395 represents 1,500 members across Saskatchewan in a variety of sectors.