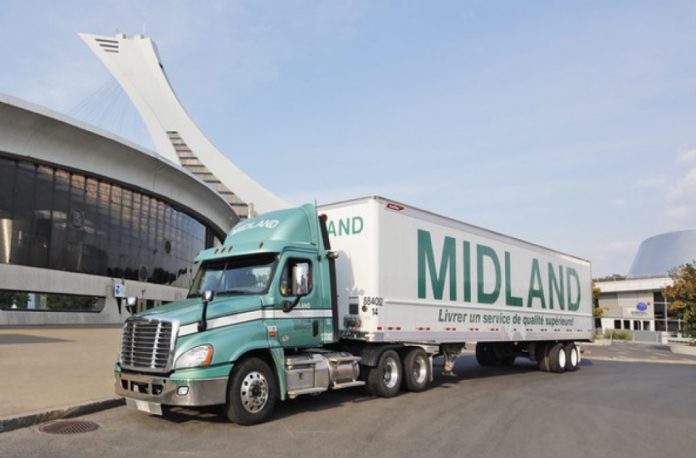 Montreal, July 5, 2019 — Once again, the Teamsters have shown leadership benefitting men and women workers in the transportation industry. The Union has successfully concluded bargaining for an enhanced collective agreement that is already considered a model in Quebec’s trucking industry.

The new labour contract, which is historic in a number of ways, was ratified by 84.3% of the 114 men and women workers at Midland Transport Inc. Brother Alain Michaud, Union Representative and Secretary-Treasurer of Local Union 106, and his bargaining committee obtained substantial improvements to their coworkers’ working conditions.

Given the labour shortage in the trucking industry, the Teamsters have raised the bar several notches for other carriers.

With a termination date in 2024, the new collective agreement provides pay increases totalling over 20%. By the end of the contract, urban drivers’ pay will increase to $27.53 per hour. There will be a new classification for doubletrailer truck drivers, who will earn $30.10 per hour starting this year, while jobs for almost all other drivers are guaranteed.

All Midland drivers will be paid by the hour, and will be paid overtime starting with the ninth continuous hour of work, regardless of whether they drive in the Greater Montreal area, over short or long distances, or in the province of Quebec or Ontario. New hires will earn full pay after three months’ employment; this is in contrast to the two year waiting period set out in the previous collective agreement.

Workers will also have three weeks’ paid vacation after only 24 months’ employment with Midland.

“I heartily congratulate Alain and his committee for the colossal work they accomplished during these bargaining sessions,” emphasized Jean Chartrand, President of Teamsters Local Union 106. “With his 37 years’ experience at the bargaining table, Alain was able to convince company management that it is in their interest to offer our members these excellent working conditions.”

Drivers at Midland will also have 15 paid statutory holidays, four weeks’ paid vacation after nine years, 11 guaranteed switches for Kingston, Ontario, the option of working 10 hours per day for four days, a signing bonus of $650 (after tax), and back pay retroactive to the start date of the new collective agreement.

On social media, nonunionized truck drivers are increasingly vocal about their unsatisfactory working conditions. Despite the labour shortage in the trucking industry, these drivers are under such pressure to deliver goods faster that they sometimes lose sight of the basics.

“Nonunionized drivers need to take a cold hard look at their working conditions. Are they getting fair pay? Can they take sick leave? Do they have good group insurance coverage? Can they retire at a reasonable age? The way to get these benefits is pretty simple: you need to unionize,” concluded Chartrand.

So, while there may be no harm in venting on social media, the one way to actually improve working conditions is to join North America’s most powerful truck drivers’ union: the Teamsters.

With the Midland contract, Teamsters Union Local 106 and its members have shown just how it’s done.

Want to join the Teamsters?
Contact Fitos Vritsios at (416) 938-7760; your confidentiality is assured.

The Teamsters represent the interests of 15,000 professional truck drivers in Canada; more than 50,000 in North-America. Teamsters Canada and its 125,000 members are affiliated with the International Brotherhood of Teamsters, which boasts 1.4 million unionized members across North America.