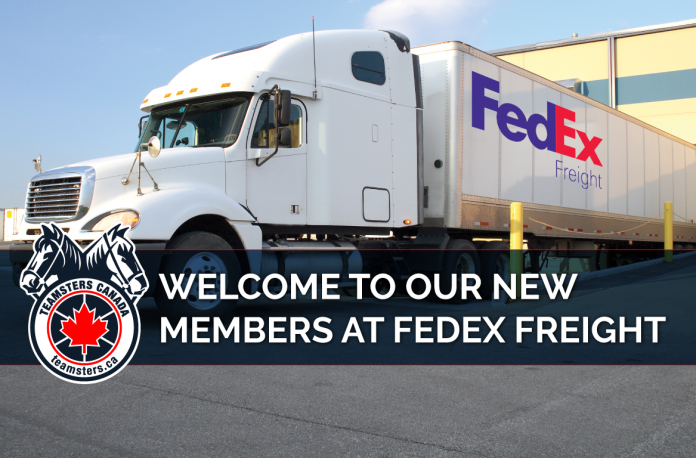 Laval, QC, March 9, 2019 — Teamsters Local Union 931 has filed a request for union certification on behalf of approximately 30 owner operators at FedEx Freight. The Montréal-based workers make deliveries and drive semi-trucks for a living.

Teamsters have been actively organizing FedEx drivers from coast to coast to coast. Workers at a FedEx warehouse in Surrey, BC, have also chosen Teamsters Local Union 31 to represent them.

“That was our first major organizing victory, after FedEx pilots joined in the United States,” explained the president of Teamsters Canada, François Laporte. “These workers want better and they deserve better.”

The formal request for union certification was filed on Thursday with the Canadian Industrial Relations Board.

“I would like to welcome the FedEx Freight workers into the big Teamster family,” added the president of Teamsters Local Union 931, Richard Lamoureux. “Teamsters are the dominant union in the transportation industry in North America. These workers make the right choice.”

The presidents of Teamsters Canada and Teamsters Local Union 931 also wanted to thank organizers Alain Coursol and Alain Turcotte for their excellent work, as well as the workers who helped with the union drive.

Teamsters represent close to 125,000 workers across Canada, including over 17,000 workers in the courier industry and over 15 000 long-haul truckers. The International Brotherhood of Teamsters, with which Teamsters Canada is affiliated, has 1.4 million members in North America.