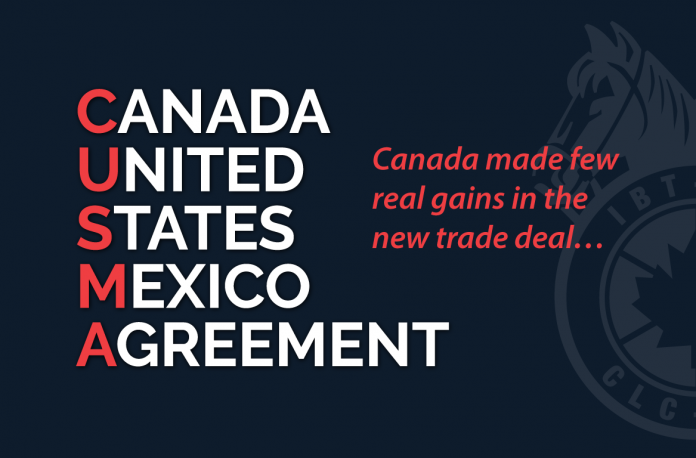 Canada made few real gains in the new trade deal…

Laval, QC, November 30, 2018 – Today’s signing of the new NAFTA offers Teamsters little reason to celebrate. American tariffs on steel and aluminum continue to actively harm hundreds of the union’s members. Dairy workers also remain under a cloud of uncertainty; their compensation package is being negotiated in secret between the federal government and big business.

“Canada’s few real gains, like the elimination of the old Chapter 11 and a new labour chapter, won’t immediately affect our members in their day-to-day lives,” explained the president of Teamsters Canada, François Laporte. “U.S. tariffs are still costing us jobs, and we still don’t know what kind of compensation dairy workers will be entitled to. Ottawa has inexplicably chosen not to consult us on the issue.”

On paper, the NAFTA 2.0 labour chapter is superior to the original NAFTA and the Trans-Pacific Partnership. However, it’s enforceability and capacity to dissuade companies from moving to low-wage jurisdictions remain to be tested.

Eliminating the old Chapter 11 and its investor-state dispute settlement (ISDS) mechanism is also good for the country. Under ISDS, Canada became the most sued NAFTA nation because of its comparatively stronger environmental and public health regulations.

It is unclear if Canadian negotiators managed to make any other gains. In their fight to preserve as much of the status quo as possible, compromises were made on everything from dairy to prescription drugs to B.C. wines. This was meant to provide stability for workers and businesses who rely on Canada U.S. trade.