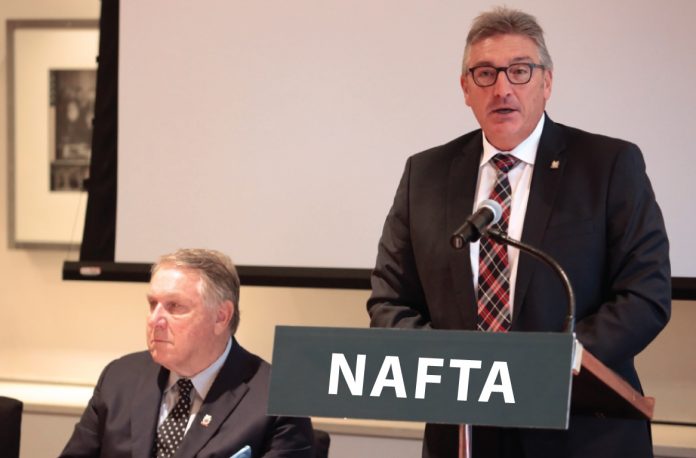 Hoffa, Laporte Say Workers’ Concerns Must Be Put Front-and-Centre in Any Agreement

Laval, QC, September 10, 2018 — The following is a joint statement from Teamsters General President Jim Hoffa and Teamsters Canada President François Laporte in response to outstanding issues that U.S. and Canadian trade representatives must hash out to ensure that a new North American Free Trade Agreement (NAFTA) is a deal that works for workers.

“As negotiators eye the finish line for replacing NAFTA, it is time for parties on both sides to reach consensus on the remaining issues that are holding up completion of the pact. We reiterate that this must be a trilateral agreement to enjoy the support of the Teamsters. Any compromises, however, must put the needs of workers across the continent first instead of just further lining the pockets of big business.

“To start, labour rights provisions included in the Labor Chapter must protect workers and their ability to organize with independent unions, and must be enforceable. North American families deserve the dignity that fair wages and working conditions bring.

“Additionally, the U.S. and Canada must create a mutually beneficial landing zone where they can come to terms on dairy and dispute settlement. For the U.S., that means compromising when it comes to Canada’s dairy market and supply management system. Meanwhile, Canada must not allow its views of the current U.S. administration to cloud its judgment and should drop its demand to preserve Chapter 19 dispute settlement.

“If all this is done, NAFTA 2.0 can become an agreement that lifts up North American workers and, therefore, can be supported by the same unions that have opposed the original deal and its expansion in other free trade pacts for over twenty years.”

Teamsters represent 125,000 members in Canada in all industries, including 5000 in the dairy industry. The International Brotherhood of Teamsters, with which Teamsters Canada is affiliated, represents 1.4 million workers in North America.