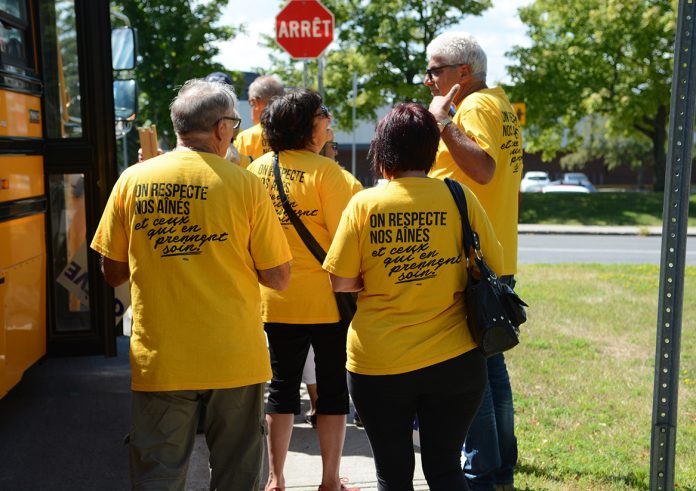 Workers at five Résidences Soleil retirement homes will go on strike tomorrow morning. Wages are the main sticking point for members of Teamsters Local Union 106; they are $6/hour behind their sisters and brothers in public sector homes.

Laval, QC, July 16, 2018 — Strikes are planned tomorrow morning at 8 a.m. at five Résidences Soleil retirement homes. Facilities in Granby, Laval, Saint-Hilaire, Pointe-aux-Trembles, and Saint-Laurent will be affected by the labour dispute. At this time, no further meetings with the company have been set.

Wages are the main sticking point. Workers at Résidences Soleil retirement homes are $6 behind those in public sector homes, despite doing exactly the same work and caring for seniors with the same passion and dedication.

Teamsters Local Union 106, the union representing the workers, fears a labour shortage its predicting in the senior care industry could worsen. A shortage is guaranteed to have consequences on the quality of care offered to seniors over the coming years.

The walkout will not affect residents at the homes as essential services will be entirely maintained. Picket lines will nevertheless go up at each location.

A spokesperson for the Teamsters, Stephane Lacroix, will be available to give interviews tomorrow morning as of 7 a.m. He will be at the Résidence Soleil retirement home in Laval, located at 1455, boulevard de l’Avenir, Laval, Qc H7N 0A1, until 9 a.m.

Why: To significantly improve wages and issues related to workload

Teamsters represent over 40,000 workers in the province of Québec, including over 1000 workers at retirement homes and CHSLDs. The International Brotherhood of Teamsters, with which Teamsters Canada is affiliated, represents 1.4 million members in North America.