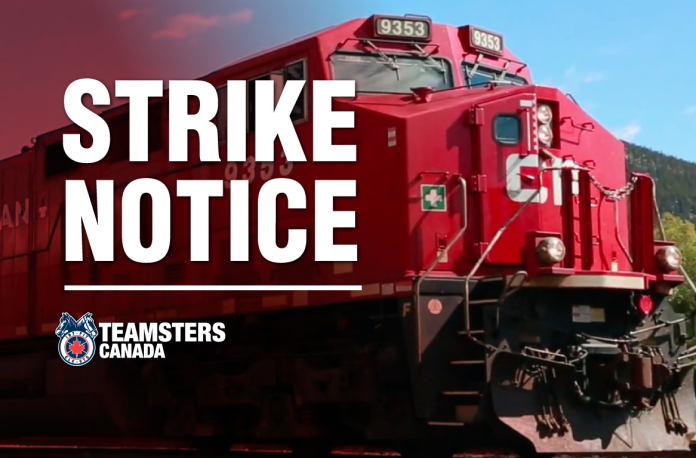 Laval, QC, May 26th, 2018 – The Teamsters Canada Rail Conference (TCRC) and the IBEW System Council No. 11 have served Canadian Pacific (CP) with notice of intent to strike. In the event there is not a negotiated settlement between the parties, the earliest both unions could go on strike is Tuesday, May 29th at 2200 EDT.

After workers at CP voted to reject the last contract offers, the company is still refusing to negotiate seriously.

“CP is offering more of the same contract language that workers just voted to reject a few hours ago. The company clearly isn’t serious about reaching a negotiated settlement and delivering on their promise to do right by their employees,” said Doug Finnson, President of the TCRC.

“CP has continually changed directions during negotiations with little evidence that a settlement was ever possible. We have given CP every reasonable opportunity to negotiate and avoid a strike, but sadly that has led us nowhere,” said Steve Martin, Senior General Chairman from IBEW System Council No. 11.

Teamsters and the IBEW are committed to working with federal mediators and reaching a negotiated settlement. Both unions are willing to remain at the bargaining table until the May 29 strike deadline and beyond.

Some 360 signals and communications employees, members of the IBEW, voted 98.3% to authorize strike action on April 12, 2018. They voted 97.2% to reject CP’s final offer on Friday.

Some 3000 conductors and locomotive engineers, members of the TCRC, voted 94.2% to authorize strike action on April 6, 2018. They voted 98.1% to reject CP’s final offer Friday. Commuter train services would not be affected in the event of a strike by Teamster members.

The International Brotherhood of Electrical Workers (IBEW) represents close to 70,000 workers in various industries across Canada including 1300 in the rail industry.