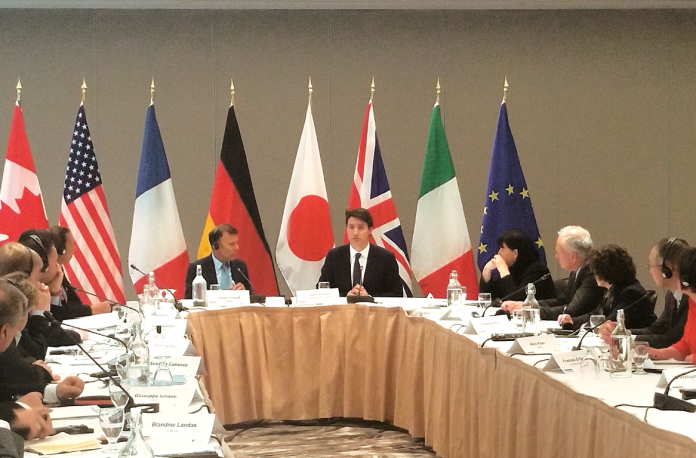 Teamsters Canada attended the OECD Social Policy Forum held in Montreal on May 14, 2018. The Forum explored the opportunities and challenges in social policy in today’s rapidly changing economic and social environments. Hosted by Secretary-General of the OECD, Angel Gurría, and by Canada’s Minister of Families, Children and Social Development, Jean-Yves Duclos, the Forum brought together more than 300 stakeholders from OECD and emerging economies to exchange perspectives on how governments can shape social policies to prepare for the future and better support inclusive growth. This is an important international issue, with lessons to learn here at home.

Along those lines, the Group of Seven, or the G7, represents the seven largest economies in the world. Because Canada is hosting the G7 Summit this year, the Canadian Labour Congress (CLC) hosted the L7, a meeting of the heads of Labour Organizations from G7 countries. The L7 works on creating a common front to bring Labour’s positions to the G7 meetings. Teamsters Canada attended the L7 and heard the L7 leaders discuss issues and concerns that are consistent with our experience in Canada. Prime Minister Justin Trudeau attended a session to listen to the concerns and to share his understanding on the important role unions play in policy development both internationally and in Canada.

Still on the Labour front, International Labour Organization (ILO) Conventions on Labour Rights set global standards that bind states to Conventions once they are ratified by these states. Last year, for example, Canada ratified ILO Convention 98, on the right to organize and bargain collectively. In Canada, the Conventions can act as a yardstick when governments draft legislation, and courts look to the Conventions when rendering decisions on labour rights. The Conventions are starting to be part of free trade negotiations, with Canada joining other nations in pushing for their inclusion in trade deals. Teamsters Canada recently attended a tripartite meeting focused on various issues, including a proposed new ILO Convention on violence and harassment in the workplace. If the Convention were to be adopted, it would give us strong arguments to institute and strengthen worker protection measures in Canada.