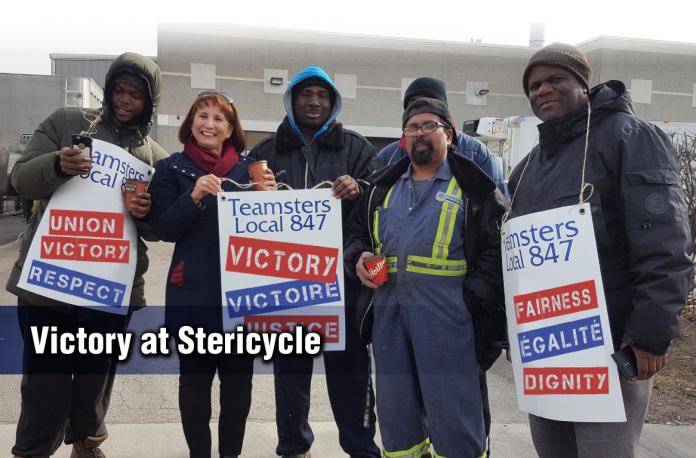 Over 120 workers at Stericycle, a medical waste management company, ended their week-long strike on this month. Workers won extra personal days, a new pension plan and big raises over the course of a three-year contract. Plants in Brampton, Ottawa and Scarborough had been affected by the strike.

“Stericycle workers felt abused and disrespected by their employer. It was just a matter of time before a strike happened,” explained the president of Teamsters Local Union 847, Fernanda Santos. “We stuck together and stood our ground, and the result was a stunning victory for the Teamsters Union.”

Workers involved in the strike transport, sort, process and incinerate medical waste. They also perform a variety of other tasks, such as plant and vehicle maintenance.

With the new collective agreement, the union secured a $3 raise over three years for all categories of workers. It worked out to annual raises ranging approximately from 3% to over 6%, depending on what a person was being paid before the strike. That brings the company closer in line with competitors like Waste Management in Toronto, whose workers earn $4 more than those at Stericycle. Those workers are members of Teamsters Local Union 419.

Jobs in waste management are difficult and demanding. At Stericycle, they come with the added risks of handling medical waste. The new defined contribution pension means that Stericycle workers can retire on time with a respectable standard of living. New personal days will also allow workers to spend more time tending to family obligations.

Workers have a right to grow financially and progress in their careers. Being unionized guarantees respect, justice, equality, fairness and dignity in the workplace, and allows workers to enjoy a better quality of life.

To learn more about joining the Teamsters, click here.

Teamsters represent the interests of close to 125,000 workers in Canada in all industries. The International Brotherhood of Teamsters, with which Teamsters Canada is affiliated, has 1.4 million members in North America.