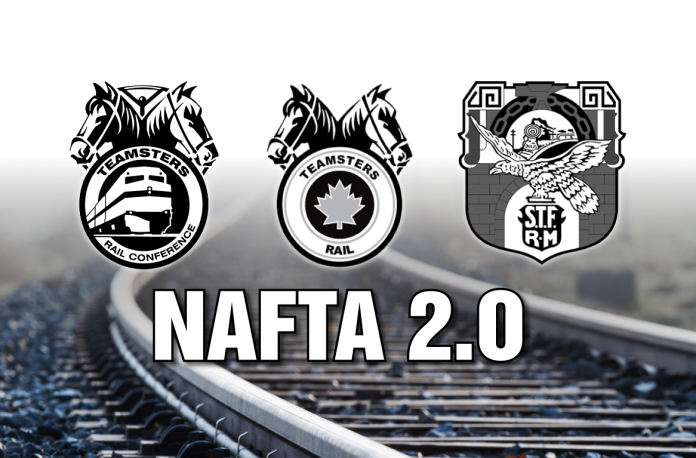 Laval, QC, April 9, 2018 – The Teamsters’ rail conferences in the U.S. and Canada today joined with unionized Mexican freight rail workers in calling for the inclusion of language in a revamped North American Free Trade Agreement (NAFTA) that would ensure that all industry workers on the continent are treated fairly and equitably.

In a trilateral letter sent to top U.S., Canadian and Mexican trade officials, the Teamsters Rail Conference USA (TRC), Teamsters Canada Railway Conference (TCRC) and Mexican Railwaymen’s Union (STFRM) said the unions are standing in solidarity in support of a new NAFTA that looks out for workers’ interests across sectors, as well as for much-needed infrastructure investment.

“We urge you to commit, whether in the text of NAFTA 2.0 or in a simultaneous tri-national side agreement, to invest a minimum of 2% of gross domestic product annually on transportation infrastructure construction, repair and maintenance,” the letter stated. “Especially along our two borders, the bridges and interchanges should be upgraded as part of NAFTA modernization.”

The unions also asked trade authorities to “enshrine the principle of exclusivity” into the cross-border services chapter that would make clear that freight rail crew changes should happen at interchanges near border crossings. “Our members have no interest, at the expense of their brothers and sisters in companion unions, to drive their trains deep into the territory of another party,” they wrote.

The entire letter can be read here, on teamsters.ca