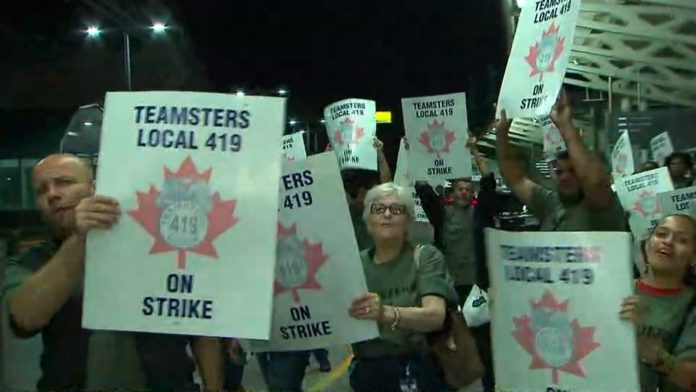 Toronto, July 27th 2017 – Over 700 workers employed by Swissport at Pearson Airport walked off the job tonight at 9:30 pm. The workers handle baggage and cargo, tow planes, clean cabins, and perform flight operations tasks for over 30 airlines. The company’s uncompromising attitude and disrespect for workers are directly responsible for this labour dispute.

Badial regrets that passengers will likely have to deal with lost luggage, significant delays and flight cancellations at Pearson. “We spent weeks trying to avoid getting to this point. Sadly, the company is insisting on forcing a bad deal on workers.”

Swissport is attempting to impose a 3-year wage freeze on the majority of their workers.

The company also wants staff to work a minimum of 30 hours a week to qualify for full benefits. However, workers’ drug, health, and dental coverage should not depend on volatile weekly schedules.

Finally, the employer is asking for more “flexibility”. They want the right to change schedules with 96 hours advance notice. That means workers would no longer have stable, predictable schedules. People should be able to plan their lives more than four days in advance.

Swissport recently brought in hundreds of untrained, inexperienced temporary agency workers. The company told journalists that they were there to help handle the summer travel rush.

But Swissport VP of Operations, Pierre Payette, told the union’s bargaining team a different story over the weekend. He said that “the temps would be gone” as soon as a new collective agreement was ratified by members.

At that point, it became clear that the agency workers were actually strikebreakers. Their purpose is not to handle a summer travel rush, but to attempt to continue operations in the event of a strike.

“We’re shocked at how Swissport is willing to sacrifice airport safety and jeopardize travel plans to gain an upper hand at the barraging table,” said Badial. “We have no idea how Pearson will be able to operate safely and normally with this crew.”

To safely work in sensitive areas of the airport, baggage handlers normally require 3 to 4 weeks of training. The temp workers only received 3 to 4 days of training. This has already led to several accidents, injuries, and cases of lost luggage. In one case, they even damaged a plane.

Moreover, it is unclear how hundreds of agency workers were able to pass airport staff background checks so quickly. These normally take 3 to 6 months.