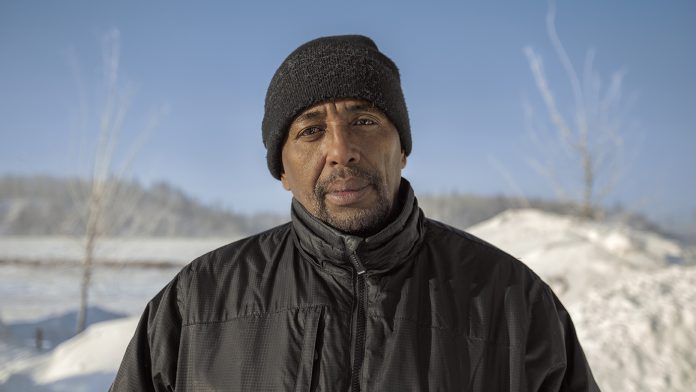 This article originally appeared in the Teamsters Canada annual report. We’re posting it here to mark the first anniversary of the Fort McMurray wildfire. Pictured: a Teamster member and Diversified Transportation bus driver who shuttled evacuees to safety.

Last year, Teamsters members were on the frontlines, providing relief during one of the most devastating and expensive natural disasters in Canadian history. The Fort McMurray wildfires forced almost 90,000 people to flee the Fort McMurray area and destroyed thousands of homes.

Disasters have a strange way of bringing out the best in everyone. For hundreds of Teamsters, that meant bravely working through the catastrophe, helping in whatever way possible: bussing evacuees to safety, hauling clean water to work camps crowded with displaced residents, moving trains packed with oil away from the inferno to avoid an even greater disaster, and more still.

“The guys that stayed behind were there just for water hauling purposes,” explained Jordan Dow, Chief Steward at Clean Harbors, a company that provides a variety of services in the oil sands region.

“These camps were overcrowded, with hundreds of evacuees on top of the workers who stayed behind, trying to keep production going,” he continued.

“Shout out to members at Diversified Transportation, who stayed behind to safety shuttle plant, city, and emergency personnel along with evacuees,” added Richard Eichel, Secretary-Treasurer of Local Union 362 in Alberta.

Despite the best efforts of these oil sands workers, the fire crippled oil production. Output fell by a million barrels a day in May and 700,000 barrels a day in June. The effects on the Canadian economy can still be felt today.

Solidarity from coast to coast

To assist with immediate recovery efforts, local unions across the country raised close to $150,000 during the crisis for the Canadian Red Cross. In the aftermath of the disaster, Local Union 362, Teamsters Canada, the Teamsters Canada Rail Conference (Running Trades), and individual members raised another $110,700 to help the community.

Teamsters have since used that money to purchase an ATV for the local fire department, filling a crucial need. The rest of the money was split between the fire depart, the Wood Buffalo food bank and two school divisions.

Together with the General Presidents’ Maintenance Committee for Canada, the Teamsters helped raise $300,000 to support the Northern Lights Health Foundation, local hospitals and clinics.

“I’m having difficulty finding the words to share how this large, unrestricted gift gave our operations the financial wherewithal to rise from our difficult summer,” wrote Cindy Amerongen, from the Northern Lights Health Foundation.

The destruction bought on by the wildfires and ensuing downturn in Alberta means that help from unions has never been more important. Even if Fort McMurray isn’t making national headlines anymore, Teamsters from coast to coast are committed to helping the region pull through.