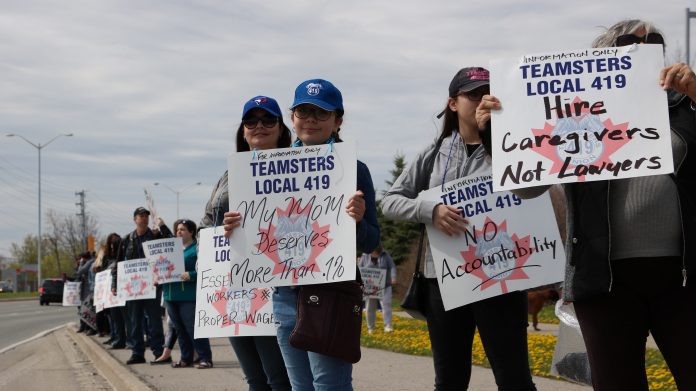 Toronto, April 28, 2017 — Teamsters Union members are organizing a demonstration on Saturday, April 29 in front of the Brampton Civic Hospital to protest pay disparities compared with workers at other hospitals in the Toronto area.

Some 700 members of Teamsters Local Union 419 – most of them women – earn up to $3 less per hour than their brothers and sisters at other hospitals in the region. They perform important clerical tasks that make it possible for patients to progress through the hospital system. The workers are employed at the following three hospitals: Etobicoke General Hospital, Brampton Civic Hospital and Peel Memorial Centre.

The workers have decided to express their anger publicly, since they cannot use strikes to make their grievances heard. In addition, the arbitration process put in place to settle disputes does not allow catch-up wage increases.

“The situation is not only unfair, it’s unreasonable,” explains the President of Local Union 419, Brian Lawrence. These people do the same work as their brothers and sisters at other hospitals. So they deserve to be paid the same.”

Salary increases for workers have been lower than the inflation rate in recent years. Yet, the Ontario Local Health Integration Network (LHIN) receives enough funds from the government to cover cost-of-living increases.

“We feel very strongly that the current system will never allow these workers to catch up with other hospitals,” said the union leader. “This situation creates a second class of workers, and we will oppose it vigorously.”

WHERE: Brampton Civic Hospital, 2100 Bovaird Drive East, Brampton Ontario
WHEN: Saturday, April 29, 2017, 10:30 a.m.
WHO: Members of Local Union 419 employed by the William Osler Health System
WHY: To protest the salary disparity compared with workers at other hospitals.

Teamsters represent 125,000 workers in Canada in all industries. The International Brotherhood of Teamsters, with which Teamsters Canada is affiliated, has 1.4 million members in North America.