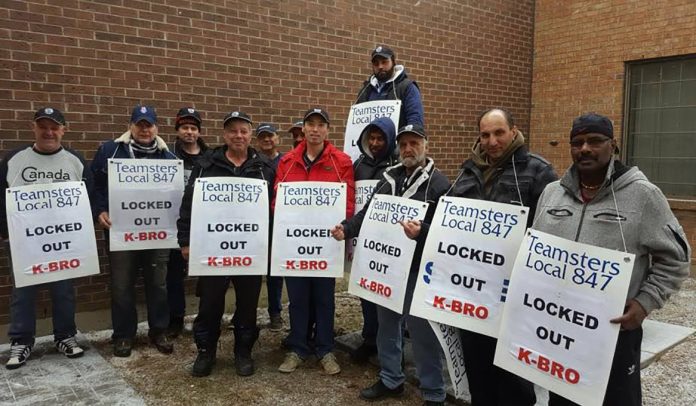 Toronto, February 2, 2017 — K-BRO workers represented by Teamsters Local Union 847 have been locked out. The fourteen truckers who deliver laundry and linen to many Toronto hospitals could lose their jobs to non-union companies.

The employer wants to add an outsourcing clause to the collective agreement, allowing them to ultimately eliminate every good, union job at their Toronto facility. K-BRO would instead hire third party workers that would not be entitled to vacations or sick pay.

“We think K-BRO wants to get rid of union jobs and that just infuriates our members,” said the President of Local Union 847, Fernanda Santos. “It’s as though they think they can treat us as second-class citizens!”

In a letter to workers, K-BRO management stated that unless their demands are met, workers would be locked out as of 12:01 a.m. on Tuesday, January 31. As a group, these courageous workers are refusing to give in to their employer’s threats.

The number of drivers has fallen from 21 to 14 in the last few years, making the local union leader fear the worst. The seven workers who left were never replaced.

“The employer is trying to impose unacceptable conditions on our members, which makes them feel completely disrespected,” added Santos. “These workers are behind the company’s success and we demand that they be treated fairly.”

The collective agreement at K-BRO expired on December 31, 2016.

Teamsters represent 115,000 members in Canada in all industries. The International Brotherhood of Teamsters, with which Teamsters Canada is affiliated, has 1.4 million members in North America.