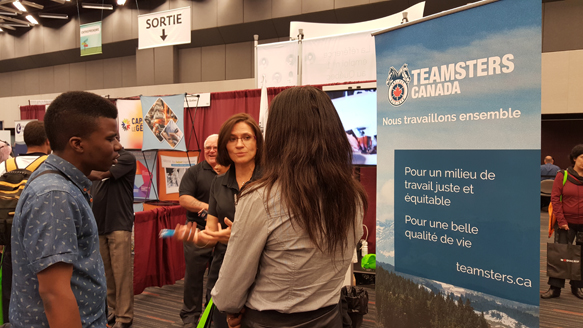 Visitors will learn the benefits of joining the Teamsters Union

Laval, June 9 2015 – For the first time ever, Quebec’s Immigration Fair (Salon de l’immigration et de l’intégration au Québec) is playing host to the Teamsters Union. Teamsters Canada will have a booth at the Fair to show newcomers the point of having a union and the services we offer.

François Laporte, the President of Teamsters Canada, gave an interview (French only) to the event’s organisers. He sheds light on the steps to join a union and explains how Teamsters Canada works.

“I’m happy to see newcomers to Canada welcomed by so many organizations and companies,” said the Union leader. “I’d like to thank the Fair’s organizers for this chance to raise awareness about the important role Unions play in our society.”

Adapting to a new country isn’t easy. Immigrants are often easy prey on the job market, usually because of cultural or linguistic barriers. Sometimes, they simply don’t know their rights as workers.

Visitors will be able to fill out a questionnaire to figure out what they have to earn in relation to the lifestyle they desire.

The Union representatives at the Fair will give out information about workers’ rights, the advantages of joining a union, the resources we put at their availability, as well as Teamsters Canada’s different activities and campaigns.

“A decent wage, benefits, and a pension plan. Those are three things workers and their families need for a better future,” concluded the President of Teamsters Canada. “Our Union has been here since 1906. We have the skills and experience needed to give workers a better future.”

This fourth edition of the Quebec Immigration Fair will take place at the Montreal Convention Centre (Place d’Armes metro station). Admission is free. Other than Teamsters Canada, almost 200 professionals will be present to answer a wide range questions about looking for a job, training, entrepreneurship, networking, housing, immigration policy, and more.